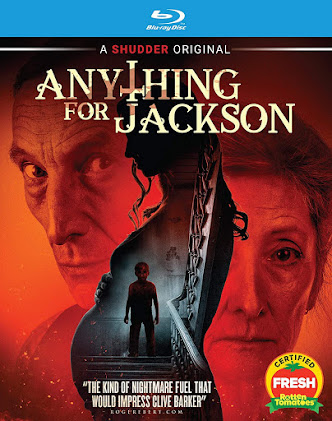 Anything for Jackson (2020) is a horror film from last year that seemed to come out of nowhere and created quite the buzz upon its festival run. Probably even more remarkable is that the films writer Keith Cooper and director Justin G. Dyck are most known for rom-coms than horror. You would never be able to tell that with the nightmare fuel that is this movie. A heartbroken elderly couple will do anything to bring back their grandson Jackson, even if that means kidnapping a pregnant woman as part of a satanic ritual.
With a glut of 'devil' horror movies I was curious how Justin was going to put a new spin on the horror-subgenre. Using grief as a framework for horror has been used quite effectively with films like The Babadook (2014) and Hereditary (2018) and, Anything for Jackson mines this for all its work. Though it doesn't go into the depth of something like the former mentioned it still takes this as a simple yet deeply effective hook. The movie is fast paced yet also doesn't skimp when it comes to fleshing out characters or building a world that feels believable. While the filmmakers pay lovely homage to past satanic movies it never feels like its trying to copy anyone else.
I think what sells this movie is the acting. Shelia McCarthy and Julian Richings are at their wicked best here. They always dangerously skirt the line of ham but never actually cross it. In fact, I think the way that they down play certain moments makes it all the more chilling. Indeed, they have a very matter-of-fact-ness about it that I found unnerving. Josh Cruddas plays the crusty pale-faced devil worshipper Ian and like McCarthy and Richings does a fantastic job in the role. And, those its a far-less showy part Konstantina Mantelos is also great.
This movie is visually engrossing as well.  With low lighting and a very muted color palate the movie really crafts a chilling, cold and downbeat vibe that only gets more intense and twisted as the feature goes on. The surreal nightmare imagery almost gives it a J-horror feel only made in Canada. I really have to give the filmmakers props for creating some provocative and scary moments without falling back on clichés. If I had to lobby a minor complaint its that the movie is maybe a little longer than it needed to be. There is, for example a subplot with a detective that goes nowhere. And, while part of me respects the films under-played finale the other part of me was left not very fulfilled.
Anything for Jackson may have some issues, I still loved how inventive, haunting with top notch performances by its leads.
Picture: Anything for Jackson, as stated in my review is a very visually interesting film and the 1080p. The movie actually has a grainy film-like quality which I think helps further give this movie a throwback feel.
Sound: Jackson has a DTS 5.1 track. The music, dialogue and sound design is all fantastic here and the 5.1 track gives it the boost it deserves! Overall nicely done.
Extras: None
Posted by The Video Attic at 7:49 AM