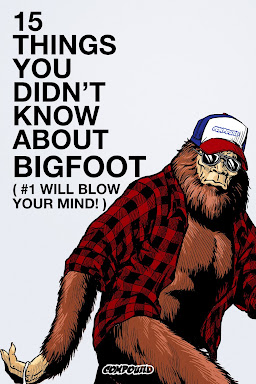 I have to say that the cover for 2021s 15 Things You Didn't Know About Bigfoot (#1 Will Blow Your Mind) kind of sold me but...I was cautiously excited. And, you know what? I thought it was a refreshingly brilliant film. The film follows Brian (Brian Emond) is a ambitious journalist that has high-hopes for his career but is stuck as in hipster clickbait "news" content outlet. He gets an assignment to cover a crazy-bigfoot hunter in this satirical laugh-riot.  It's a rare thing when comedy manages to have me laughing within the first couple minutes and, rarer yet, when those laughs keep up until the end credits. Originally titled The Vice Guide to Bigfoot, the set up masterfully lampoon's the Vice network as well as the glut of vloggers. It's Internet content satire that I feel totally hits the mark.
The various vloggers and hipster "news" content throughout is so spot on and had me rolling in my seat. It really feels like the filmmakers are well tapped into this world. Thankfully this element doesn't become a one-note joke, but instead its nicely woven into the narrative . Not only do a lot of the jokes land but, clearly time was taken with setting up aspects of the plot and paying them off. Even a seemingly throw-away character comes back in a big way at the finale. I also like how the filmmakers do a nice job at mixing the humor with some actual emotional stakes and characters have really satisfying arc's. What's even more impressive is that this is director Zach Lamplugh's first feature length film. This is a clear case of, given the right breaks Zach will be going places.
A lot of the credit also has to go to the films actors. Brian Emond does a great job at providing a good POV character that is dripping with humor of the dry variety. Though its not a showy role I still think he totally nails it and manages to get a lot of laughs. Perfectly counterbalancing this is Jeffery Stephenson who plays the bigfoot hunter. I think a lot of other actors might have taken this character very big and really made a meal out of it. Wisely though, Stephenson actually somewhat down-plays things and only goes big only when called for. Again, it was an unexpected treat when the actors can find that sweet spot of funny without going completely over-board bonkers. Honestly, I dont think I found a bad performance from the entire cast.
15 Things You Didn't Know About Bigfoot is well written and funny as hell. Why it's not getting more praise is baffling. Check it out!
Picture: Kino provides a really good looking transfer despite not being HD. I actually think its a rare case where I think the low-fi actually helps and enhances the found footage experience.
Sound: It's great to see this film got a DTS 5.1 track. Dialogue and sound design comes through nicely and there was some nice spacing speakers wise in my opinion, and not just front channel heavy. Overall a very solid sound experience.
Extras: None.
Posted by The Video Attic at 7:01 AM