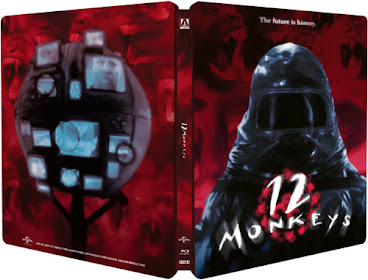 It still amazes me that Gilliam's film got a hefty budget of nearly thirty-million dollars from Universal Pictures. And, maybe even more incredible is the movie made a lot of money earning nearly two-hundred million dollars at the box-office. That doesn't include various home video releases. A man named James Cole (Bruce Willis) is a man brought back to the past to trace the path of a deadly virus that will destroy almost the entire planet.  I have to say that watching Terry Gilliam's 12 Monkeys (1995) is eerie in a post-pandemic world. Certainly, the movie reads far more frightening and timely then when it was released.

12 Monkey feels like the perfect blending of high-concept '50's science fiction pulp, '80s Cannon go-for-broke lunacy with the brooding mid '90s attitude all injected with Gilliam's brand of surrealism. At just over-two-hours the film is a fast paced what a staggering amount of detail in both its direction but also brilliantly dense screenplay by Janet Peoples and David Webb Peoples. I`d even say its not going out on a limb to say that this may be the apex of Gilliam's creative genius. Hell, we even have Bruce Willis when he seemed to still give a damn about acting. Speaking of which, Willis gives a career best playing James Cole a complex character without going one note. Willis wisely underplays things and there is a childlike innocence to his character that seems to fit his backstory.  Brad Pitt on the other hand devours every scene he's in and, its bizarre that he was actually nominated for an Oscar. Madeline Stowe is good but maybe a bit wooden, especially when her performance gets lost by the power hitters she's up against. This has a fantastic supporting cast including Frank Gorshin, Christopher Plumber, David Morse etc. If I had to complain I will say that movie is overtly preachy and, though its aged better than most, it still feels a bit dated.

Picture:12 Monkey's is presented in 1:85:1 aspect ratio. According to the booklet included mentions the restoration saying:

Twelve Monkeys was exclusively restored by Arrow Films and is presented in its original aspect ratio of 1.85:1 with stereo and 5.1 sound. The original 35mm camera negative was scanned in 4K resolution on a Lasergraphics Director at EFilm, Burbank. The film was graded and restored at Silver Salt Restoration, London. Grading was supervised and approved by Terry Gilliam. The stereo and 5.1 mixes were remasterd by NBC Universal.

For those unhappy with the previous Universal blu ray (myself included) I am very happy to report that this is a much needed improvement.  Dirt, scratches and artifacts have been scrubbed clean. The overall film looks cleaner and it seems like Arrow did a good job at the tricky navigation of Gilliam's color palate. I think the contrast in color was really nicely handled.

Sound: 12 Monkey's has both a 2.0 and DTS 5.1 track. Both offer, in my opinion a very solid sound presentation. I honestly couldn't tell much different but, I would say the 5.1 offers a slightly more healthy and robust presentation. Dialogue comes through clear though its sometimes hard with Gilliam's sound design, as this gets drowned out but sound design/effects. Overall its not a huge leap but I think its much better than the previous release.

Extras: The previous bonus features have been ported over and include: Audio commentary by Terry Gilliam and producer Charles Roven, The Hamster Factor and Other Tales of Twelve Monkeys, feature-length making-of documentary by Keith Fulton and Louis Pepe (Lost in La Mancha), The Film Exchange with Terry Gilliam, a 1996 interview with Gilliam and film critic Jonathan Romney, recorded at the London Film Festival, Appreciation by Ian Christie, author of Gilliam on Gilliam, The Twelve Monkeys Archives, Theatrical trailer The Limited edition Steelbook also features newly commissioned artwork by Matt Griffin and a  booklet featuring writing on the film by Rabin, and an excerpt of Gilliam on Gilliam by Ian Christie