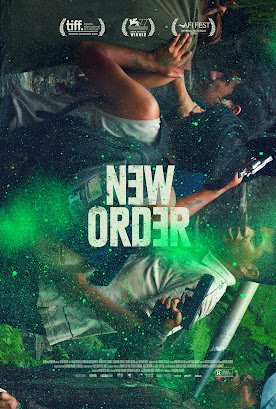 Neon Films provided me with a free digital screener to review. The following review reflects my own honest opinion.
Conceived six years ago, Michel Franco’s near-future dystopia feels ripped from headlines that haven’t yet been written. While protests rage in the streets, Marianne’s high society family prepares for her wedding. At first, only splatters of green paint and the appearance of Rolando, a former employee seeking emergency medical funds, intrude on the festivities. But soon the party is unable to keep the reckoning at bay, and what follows is a swift disintegration of law and order defined first by class lines, then by disastrous government recapitulation.
The best way to sum up New Order is if the filmmakers would have made a Joker (2019) follow up to the after math of the social revaluation. Yet, the movie is marred by a lot of missteps. Director Michel Franco clearly is going for shock-and-awe with his sixth feature film. And, I think the movie does not disappoint when it comes to an oppressively brutal world it creates. The use of production design and stark claustrophobic camera work all really paints a blood-splattered vision of violet uprising. From a technical standpoint the movie is expertly done.
Though I have to say that ultimately the movie fails on what's its trying to convey. I think one of the issues is that Franco paints with a rather broad-brush and any kind of subtly or nuance is thrown right out of the window. And, I could even forgive a film that is maybe over-the-top in its allegory but I felt that the entire second and third out just totally got away from the filmmakers. The end result is a movie that feels like its trying to make some very timely points but just feels aimless in how it wants to express its core themes.
Not to mention it feels like the filmmakers undercut their own films message as the class-rebels only seem to be motived by making themselves rich-starting the cycle all over again.  Its especially painfully when you look at a film like Parasite (20190 which not only deals with class-struggle but does it in a way thats by no means subtle but has enough solid foundation in its story. Not to mention its a brilliant film in every way possible. New Order feels like it wants to shock you with its on screen brutality so that you will be distracted by the fact that the movie is way out of its element in terms of providing a thoughtful meditation on class-struggle. The movie is not without its merits and its overall well acted, well shot and has a great atmosphere. Its just at the end of the day the movie is a hollow attempt.
Posted by The Video Attic at 2:57 PM