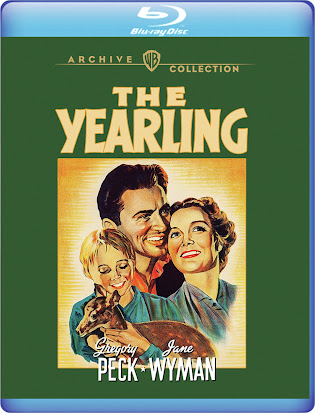 Based on the Pulitzer Prize winning novel of the same name, The Yearling (1946) tells the story of a family that settled on a farm after the Civil War. The film sees head of the household Penny Baxter (Gregory Peck) his wife Orry (Jane Wyman) and son Jody (Claude Jarman Jr) making the most of their hard life. Jody, feeling lonely takes in a pet in the form of a baby deer. Soon the critter reeks havoc in this family outing.

The Yearling is a movie that I probably wouldn't have been interested in but, I am a big fan of both Jane Wyman and Gregory Peck. Though, its a movie that I am very glad I pushed myself to watch. I thought that this was just going to be a sappy-feel good movie about a boy and his literal doe-eyed pet. And, whilst that is a story-thread the movie is more about growing up and coming of age and how love, lose and hardship can shape a persons character. Director Clarence Brown who was known for grand films like Anna Karenina (1935) adds a big beautiful scope and scale to a small to a deeply human and personal story.

A year after Peck starred in his breakout role in Hitchcock's Spellbound (1944) he had another hit with The Yearling which earned him his second Oscar nomination. Gregory Peck has a natural ease and charm to spare and truly shows off a nice range of acting. Jane Wyman is saddled with a stuffy-ice-cold mother role but she brings it the life with layers and unexpected warmth underneath that bubbles up to the surface. Jane Wyman (famously the first Mrs. Reagan) earned her first Oscar nomination for this film. And, not least of all Claude Jarman Jr who is frighteningly good in the emotionally demanding role as Jody. Jarman is wide-eyed innocence personify at the start of the film and its interesting to see how his character transforms. Each actor from Peck to Wyman to Jarman is truly the heart and soul of this movie.

The Yearling will tug at the heart strings also not crossing into the overly sappy territory. Among the best films of '46 and  showcases amazing acting, writing, cinematography and direction.

Picture: Another top-notch 4k restoration from Warner Archive who, at this point has yet to disappoint me in their film restorations. The Yearling is a beautiful looking film, in fact it won the Oscar for best cinematography for Charles Rosher, Leonard Smith and Arthur E.Arling. This new transfer is breathtakingly stunning in its clarity especially when it comes to outdoor scenes. Of course the film is cleaned up of any artifacts and scratches and grain has been smoothed out where its virtually undetectable. Small details in set designs, locales and costumes also really pop here. Excellent work.

Sound: The Yearling has a DTS 2.0 track. Dialogue comes through nicely and Herbert Stothart's underrated score is highlighted here.

Extras: The Yearling includes: Tom and Jerry Cartoon: The Cat Concerto, The Screen Guild Players Radio Broadcast of The Yearling w/Peck and Wyman reprising their roles. Also includes a trailer.