The 'Czar of Noir' stops by the attic to discuss his work on the recent Warner Archive title They Won't Believe Me as well as some other burning questions.

My Review for that Blu Ray HERE Please note the link will open in a new browser. 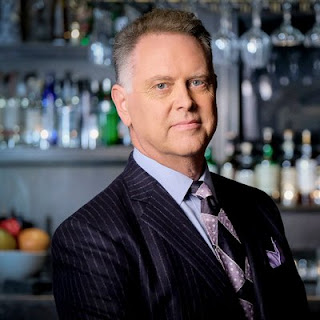 Q: When did you first start working on finding/restoring They Won't Believe Me?

The Film Noir Foundation doesn’t get to claim credit for this one. This was solely the responsibility of George Feltenstein, who was the curator and guardian of the Warner Bros. classic catalog in the company’s home entertainment division. Yes, I’d talked with George for years about the possibility of restoring the full 95 minutes version, but he’s the one who got it done. He gets all the credit.

Q: What would you say makes this movie stand out among the many other noirs?

I think it is the signature film for its producer, Joan Harrison. She was one of only three female producers in Hollywood at that time, and being a protégé of Alfred Hitchcock she had a predilection for psychological thrillers. This one has a distinctively female sensibility. Instead of the usual femme fatale we get a homme fatal—a man who ruins the women he comes in contact with. The intriguing aspect is trying to determine whether this destruction is calculated—or if it results from some sort of uniquely male combination of arrogance and passivity. I just don’t think a man would have made this film in the same way. And although it’s directed by a man, Irving Pichel, Harrison is clearly the guiding force behind the production.

Q: Can you talk about how you found the missing footage? Also what scenes are not included in this version?

The missing footage was always there, in the Warner film archive. The film was originally made at RKO, the library of which WB now owns. When RKO reissued the film on the bottom half of double bills in the 1950s, it cut 15 minutes. B movies rarely ran more than 80 minutes. The cutting wasn’t haphazard; it’s actually very thoughtful and even artful in places. But it must have still hurt Ms. Harrison—I can’t imagine she watched the truncated version. There were three entire scenes cut out, and in other places scenes were trimmed of anything that wasn’t directly related to the plot. It’s the characterizations, particularly those of Jane Greer and Susan Hayward, that suffered by the cuts, not the story. In some cases I’ve noticed single shots within a scene deleted, just to save five or six seconds.

Q: What's a noir that is currently missing that you are hoping to find/restore?

Right now we’re restoring a 1947 B called The Argyle Secrets, written and directed by Cy Endfield. It’s his first feature. He’d go on to make many great films, especially in England after he was blacklisted as a suspected communist in the United States. It’s about a neo-Nazi conspiracy in the U.S. immediately following WWII. Still timely.

Q: You`ve had the privilege of interviewing so many great actors over your amazing career. Were you ever starstruck by anyone?

Not really. Certainly not going into an interview. Ricardo Montalban really impressed as a person, not as a celebrity. I gained huge respect for him after meeting and talking to him.

Q: What has been (to date) the most surreal moment in your career?

Hmmm, I’m not sure. The night I baby-sat Lawrence Tierney at the Egyptian Theatre was pretty memorable. I wrote about it here: http://www.eddiemuller.com/tierney.html

Lee Grant suggested a three-way with me and Ben Mankiewicz at the TCMFF and I wasn’t sure if she was kidding or not.

Q: What would you say is the most overrated and underrated noir film?

It always upsets people when I answer this. I’d say Kiss Me Deadly (1955), but add that I actually like the film very much. It just think it’s been overrated. As for underrated, I’m a big fan of the film Tomorrow Is Another Day (1951), directed by Felix Feist.

Q: Lastly, any upcoming projects are you working on that fans of your work would like to know?

Well, besides The Argyle Secrets, I’m very excited that Running Press will be publishing a revised and expanded edition of my first noir book Dark City: The Lost World of Film Noir. It’s got three new chapters and fresh material throughout. I’m completely thrilled with the result—it’s now the book I always dreamed it could be, so I guess becoming a host on TCM pays off in myriad ways.

A Big Thank You to the wonderful Eddie Muller for donating his time for this brief interview. As always check out Turner Classic Movie's Noir Alley Website HERE.(Please note: The following links will open in a new browser) Also to learn more about the Film Noir Foundation Click HERE

And, for updates on new reviews and interviews please bookmark this site and follow me on Twitter @StrangeCinema65