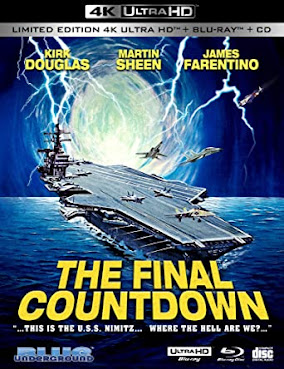 Disclaimer: Blue Underground  has provided me with a copy of this film free of charge for the purposes of review. All opinions contained within are my own honest reflections.

1980's The Final Countdown not to be confused with the ear-worm pop song was a relatively large budgeted film (for the time) and managed to turn a small profit. The film has gone onto find a loyal cult-following despite a luke-warm critical reception at the time of its release. The film follows a modern aircraft that is thrown back in term to just before the events of Pearl Harbor. They must figure out how to get back to the present but also if they want to change the outcome or not.
The Final Countdown is a film I was well aware of but never actually had a chance to see until this release. Its often be said this film feels like an extended episode of The Twilight Zone and its easy to see why. The film certainly does have the high-concept strangeness that the landmark show was known for. I also admired how the setup is fairly straight forward and it never feels like the screenwriters have to do a lot of heavy lifting with its central premise. And, the film actually is pretty cool in how it juggles high-concept sci-fi with a good old fashioned action romp.  Kirk Douglas who at this point had long cemented himself as a screen icon and gives a wonderful performance here. Douglas gives this film the kind of prestige and polish and never hams it up. Martin Sheen, Charles Durning and Kathrine Ross further help elevate what could have been b-material into something special. You even have a small role in it for Troma founder and filmmaker Lloyd Kaufman.
The film is not without its issues and I think that the effects haven't aged the best and while the movie is engaging enough there are some lulls in the action that make the film drag a bit. I think the movie could have used a trim and a more streamlined plot. The movie though has enough charm and interesting plot though that I can tend to overlook some of its misgivings.
Picture: The Final Countdown is outfitted with a brand-new UHD transfer. I think its safe that this film which is now over-forty-years old has never looked better. There is certainly a noticeable uptick in the brightness and things like skin-tone and costumes, locales and sets have nice crisp look to them. Thankfully grain is not chunky and well smoothed throughout. Of course outdoor scenes look truly pop with this transfer. I also am grateful that it doesn't have an overly worked or processed feel to it.
Sound: Countdown features a Dolby Atmos track as well as a DTS 5.1 and 2.0 track.
Extras:  As always Blue Underground has you covered when it comes to extras. Included is an Audio commentary with Director of Photography Victor J Kemper. Lloyd Kaufman Goes Hollywood: Interview with Associate Producer and Founder of Troma Lloyd Kaufman, Starring the Jolly Rogers: An Interview with The Jolly Rogers F-14 Fighter Squadron, Trailers, TV Spots, Poster and Still Gallery. Also includes the Soundtrack by John Scott and a collectible booklet featuring the Zero Piot Journal.
Posted by The Video Attic at 11:18 AM