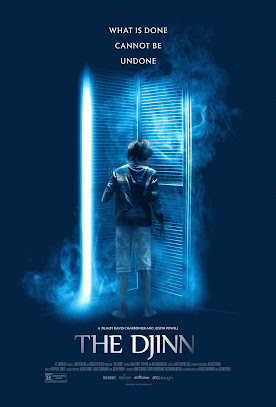 I was really interesting in The Djinn as I think the is largely underused in horror outings outside of the Wishmaster series. The film centers around a boy named Dylan (Ezra Dewey) that is unable to speak (through circumstances explored later on,) and is adjusting to life in a new home. Looking after him is his father named Michael (Rob Brownstein). Whilst the father is working one night as a DJ Dylan finds a book. Within it is a spell to summon a djinn to grant him wishes. This obviously back fires.

I want to first say what I think really works about this film before I get to where it all falls apart. Clearly directors David Charbonier and Justin Powell wanted to give this movie a real sense of haunting atmosphere and they largely succeed. Thanks to Julian Estrada's photography the lower budget film has a bigger scope and feel. Blood drenched reds in certain scenes were a really nice effective touch. Right off the bat I was incredibly impressed by the cast including Rob Brownstein and Ezra Dewey. Brownstein has a real warmth and chemistry with Dewey and I think that they easily connect with the audience on a core emotional level. Ezra Dewey is tasked with the large amount of acting which is a real gamble. Thankfully though it pays off in spades as the young actor gives a powerhouse performance.

I think where the movie hurts is the pacing and it lacks a true sense of identity. Djinn clocks in at only 82 minutes yet, its awkwardly bogged down with needless filler and, truth be told it takes a good thirty-minutes or more for the narrative to kick into full gear. This is where the second and probably biggest failing of the film lies. It doesn't really know what it wants to be in terms of the  tone/story it wants to tell. Its very clear from the top that David and Justin want to craft a moving, even harrowing meditation on childhood, lose and feeling like an other. But, on the other hand the movie wants to also lean into jump-scares and hokey horror clichés that are done to literal death. It never is sure if it wants to be a slow-burn creepy horror like The Babadook or if it wants to go full Blumhouse horror. What we end up with is a rather weird mash up of both.

It almost feels like this would have made for a better short film rather than a feature length one as things get repetitive quickly. I`d love to know if both directors were on the same page because the movie feels like  a strange tag-of-war of ideas and tones. Like, one wanted a slow somber modern-day gothic horror tale and the other wanted gore, milky eyed demons etc. The writing also suffers from a sever lack of direction and some elements like an escaped convict is just awkward and confusing. I won't spoil the finale but it was eye-twitchingly bad. I won't lie I laughed out loud in fact.

2021's The Djinn wants you to be dazzled by its atmosphere so you`ll forget that the movie is aimless and lacks a strong identity in the story it wants to tell.