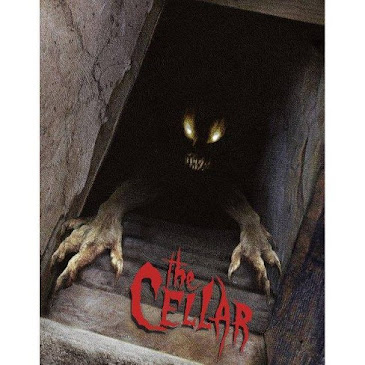 Disclaimer: Vinegar Syndrome has provided me with a copy of this film free of charge for the purposes of review. All opinions contained within are my own honest reflections.

After a string of hits like Night of the Demons (1988), Witchboard (1986) and Witchtrap (1989) Kevin Tenney made The Cellar (1989) closing out the '80s. A family made up of Mance (Patrick Kilpatrick) his wife Emily (Suzanne Savoy), son Willie (Chris Miller) and baby sister move onto a dessert dwelling whilst the father is on a job. Weird stuff starts happening in the basement where an evil Native American spirit lives.
So, I want to express that, right out of the gate I am a big fan of Kevin Tenney. Tenney exploded on the scene in 86 and injected the horror with a much needed high energy and kept it up long after genre was going through some shall we say growing pains.  I digress but, only to say I went into this film with a love for Tenney's unique brand of horror.
The Cellar is a high-concept film on a low budget and somehow manages to feel both over and underwritten. Allow me to explain. The story obviously has some very lofty ideas and bless it, it tries really hard to sell a deep and interesting mythos. Sadly, the budget just doesn't seemed equipped to fully realize its intended vision.   The underwritten part comes in the form of the "because Native Americans" shorthand which is both cringe-worthy to modern viewers and also lazy. Not to mention bad dialogue and a half baked narrative. Honestly, I think its a small tragedy  that they didn't let Tenney re-write and over haul this script. The writer, director was always skillful at distilling concepts no matter how absurd into serviceable globs of cinema goodness. Hell, he made a paper thin premise like a evil Ouija Board and made it into a '80s cult classic.  Woodward narrative has a kind of cold detachment that makes it hard to connect and engage with. I will give the screenwriter some credit for having characters with a bit of depth to them. The father son thread is probably the best part of the film outside of the creature (more on that later).
The movie is also saddled with a pretty awkward pacing that only makes the bad writing that all the more groan inducing  You could maybe and I mean MAYBE make the case that Cellar does have a kind of go-for-broke charm. The same kind of that makes Demon Wind (1990) a very bad but beloved grime coated oddity. I thought that this didn't really feel like a Tenney movie only to later learn that the director was brought on to project at the zero hour after the previous director was fired. Hence why Tenney didn't actually write the screenplay. The brilliant making-of goes into much more detail. Tenney has mentioned that he knows the movie was bad and honestly, I think he did the best with the dreadful material he was chained to. Also, I want to say that the acting is really well done with Patrick Kilpatrick, Suzanne Savoy and Chris Miller giving solid performances. Miller actually went onto be nominated for an Oscar for directing Puss in Boots (2011). Miller and Kilpatrick have a real chemistry together and it translates well on the screen. The film also has wonderful supporting actors like Lou Perryman (Texas Chainsaw 2), Danny Mora (Mr. Mom) and Ford Rainey (3:10 to Yuma).
The creature effects are really top-notch and though the monster is used sparingly (due to budget no doubt) is a slimy wonderfully gross beastie. It's truly the centerpiece to this clunky film.
Having watched and re-watched this film with both cuts AND  later commentaries tracks I feel like I've pushed my sanity to the limit (all for the good of you, gentle readers). I certainly can see that Tenney really did do his best to make some kind of sense out of this mess of a screenplay. Again, I have no doubt that if given the chance Tenney would have streamlined the script and made better if given the chance. Like its name sake the Cellar is a damp, stinky repository for horror clichés despite its lofty ambitions. The movie is bad but I will say that its the kind of shitty-yet interesting mess that may appeal to some cult audiences.
Picture: The Cellar comes by way of the 35mm print and Kevin Tenney's own personal directors cut of the film and presented in a brand-new 2k scan. You can certainly see the film has been lightened, especially in the opening nighttime shots. Obviously the prints that were being used most likely have seen better days as even with the 2k scan the film has artifacts etc. Grain is on the heavy side as well. Still, I have to imagine this is a vast improvement on any previous home video presentations, Outdoor scenes really do look slick and well done in terms of contrast and overall image detail. A fine job as always from Vinegar Syndrome.

Sound: The Cellar has a nicely done DTS 2.0 track. Dialogue comes through nicely, as does the score and sound design. Not a shocker that VS has provided a sound presentation that is free of hiss or any audio drop outs.

Extras: I wanna say from the outset that Vinegar Syndrome did a HELL OF A JOB on this release! The release contains both the producers cut and the preferred directors cut. Both films have a Kevin Tenney commentary track w/the cast. I watched both cuts and later with the commentary tracks and I am here to say they are wildly entertaining and well worth you checking out. The real crown jewel is the documentary  From Chicken Shit to Chicken Salad The Making of The Cellar (46mins). This is a truly amazing and engrossing documentary on the trainwreck of The Cellar.  I seriously could see this feature getting a Rondo nomination its that well put together.

I also want to stress that its nothing short a small miracle that we even got a directors cut which was struck by Tenney and kept in his own private collection. Vinegar Syndrome goes above-and-beyond for genre fans and we shouldn't take them for granted. Amazing job!