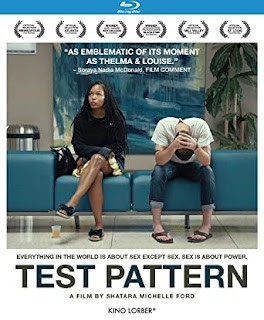 Shatara Michelle Ford first feature film centers around an interracial couple named Renesha (Britney S. Hall) and her white boyfriend Evan (Will Brill). After a girls night at a bar Renesha is drugged and sexually assaulted. The result not only traumatizes Renesha but tests the couples relationship in this indie drama.

Its always interesting to see such a visual flare right out of the gate from a budding filmmaker. Test Pattern shows flourishes of style and great camera work and it will be interesting to see how Ford will develop these skills further. Use of natural lighting is impressive and gives the movie a needed warmth given its heavy subject matter. You can also see Ford playing with contrasting dark and lights throughout. The film is also anchored by a fantastic cast with Britney S. Hall (Ballers) giving a harrowing and heart wrenching performance as a woman dealing with perhaps the worst kind of trauma. Hall brings a depth and level to the film that is nothing short of incredible. Will Brill plays Evan and, like Hall brings something deeply real to the table. His performance looks effortless but is layered and calculated.

Shatara Michelle Ford's debut film is interesting as it, in a scant 82mins it takes something we rarely seen in film which is the process of reporting sexual assault, especially in the view point of a young-African American woman. The movie sets this tone and there is this tension that just being a woman is never fully safe, and more so when you happen to be a PoC. Wisely, Ford skips over the act of sexual assault itself but is still just as powerful and heartbreaking, not only because of the act itself but how the system in reporting and bringing these rapists to justice. There is this grounded feeling that Shatara brings to the film that is equal parts brilliant and devastating.

People have said this movie is boring and I think those viewers totally missed the point. The movie is not designed to be a over-stylized over-dramatic outing but rather a somber, realistic mediation on gender, race and dealing with the worst kind of trauma.

Picture: Test Pattern looks get on 1080p. Ford has such an interesting use of color and it really pops here in this transfer.

Sound: Test Pattern has both a DTS 5.1 and 2.0 track. Even the 5.1 track comes off rather timid and I found myself having to really turn my volume up to hear dialogue.