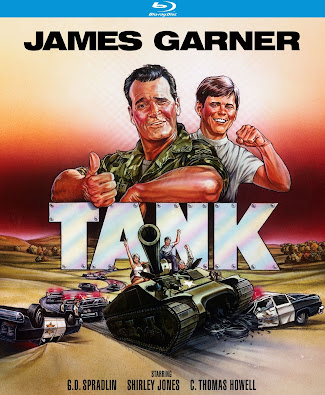 Tank is one of those '80s oddities that seemed to have come and went at the theaters yet seems to have found a small cult following on home video and television. Sgt. Major Zach (James Garner) is nearly retired and dreams of buying a boat and sailing with his wife named LaDonna (Shirley Jones) and son Billy (C. Thomas Howell). After he arrives in a new post before retirement he finds himself in hot water with the local pimp/sheriff when he defends a prostitute after she is savagely beat.

Director Marvin J. Chomsky it seems was more of a television and mini-series director rather than feature films. You can certainly tell because Tank is should be a ninety minute movie that sadly clocks in at nearly two-hours. What we get is a bloated and awkwardly paced action film. Chomsky adds a lot of scenes that do not move the plot forward but only serves as filler. You wanna get to the fun tank rampage but you have to wade through over an hour of meddling plot.

Tank is a movie that is truly made by its cast. While this was certainly not the last outing for James Garner it did prove that the actor (who was in his upper fifties when he made it) could still carry a movie. Indeed, I would say that the entire movie works due in part by Garner's tough but loveable charm. Not to mention a wonderful later in his career turn by the great G.D Spardlin and Shirley Jones in a thankless and underwritten role.

This movie is baffling as it has a top-notch cast and an early script from Dan Gordon who penned such notable projects like Wyatt Earp (1994) and The Hurricane (1999) and has a fun premise. But, weirdly the movie is poorly paced and underwritten in places.

Picture: Tank a Universal Studios re-release looks pretty good on 1080p. The movie doesn't have a 2k or 4k transfer but still looks like it has a nice uptick in color and details within the image stand out. Darker lit scenes, such as barroom scenes benefit greatly from this transfer.  The movie tends to be on the overly grainy side and it does have a few artifacts here and there. I think that overall its not stellar but its certainly a vast improvement on previous editions.