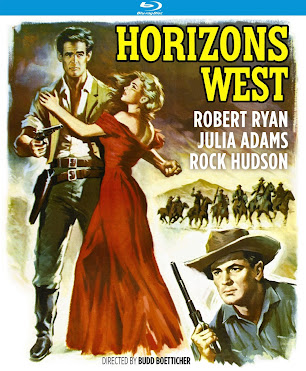 Kino Studio has been re-releasing a lot of '50s era westerns. Earlier this year I reviewed another Budd Boetticher entitled Wings of the Hawk which also starred Julie Adams. Click HERE to read that review. (Link will open in a new browser)  Horizon West tells the story of two very different brothers during the post-Civil War west. One tries to scheme his way to a fortune whilst the other tries to earn an honest living.

Horizon West puts  a lens on post-Civil War greed and how different men tried to find their way in a very new America. West is a film that feels like it would have had legs as an interesting film but feels like it misses the mark. The movie has themes of family, duty and honor but I don't think the screenwriter ever explores these deeply enough to be effective. Writer Louis Stevens does a pretty by-the-numbers story and its a shame because it feels like  a lot more could have been with the premise. Its not that the movie lacks an emotional core just the writing and directing fail to serve but a compelling story that really hits you in the feels. The highlight of the movie is of course the acting.

Though he was sometimes typecast as the bad guy, you couldn't deny that Robert Ryan played those characters so well. For me Ryan could take even so-so movies and make them entertaining just by his presents. As I said Ryan's doesn't really stretch himself in the role but he always made acting look so effortless. Playing the good brother is Rock Hudson. This came pretty early in Rock's career having made a string of movies released in '52 including Bend of the River which also co-starred Julie Adams. Hudson is great but is sadly overshadowed in a rather tepid written role. Julie Adams best known for her role in the '50s cult smash Creature from the Black Lagoon is terrific as well. Adams always brought something special to a film an her presents lights up a scene instantly. The supporting cast includes Raymond Burr, Dennis Weaver and John McIntire best known for his role in Hitchcock's Psycho (1960).

Horizon West is by no means a lost-gem in terms of westerns but I will say the film has a fantastic cast, great locales and production design and, though flawed the screenplay is serviceable.

Picture: Horizon West looks really good on 1080p. The movie has been cleaned of any artifacts and scratches. The film does tend to lose some definition it some scenes where things get a bit blurry. Maybe  this movie has been filmed in a certain way where the movie not only has a blur but a redish tinted hue. It also looks like when 3D movies were re-formatted for 2D but this doesn't seem to be the case here. It's only just a little distracting but overall its not a problem.

Sound: Horizon West has a 2.0 track. Dialogue, sound design and score comes through nicely. There was no unwanted background noise that I could detect.

Extras: Extras include a commentary by historian Toby Roan and Trailers.