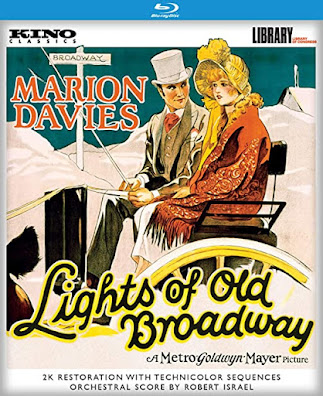 Few were as big of a star at MGM than Marion Davies. Here she stars in a drama-comedy farce called Lights of Old Broadway (1925).  Davies does double duty playing twins separated at birth. One twin is raised by a wealthy family and the other is taken in by a sweet but poor Irish couple. Set in present day turn of the century New York the two meet by chance. There is also a sub plot about Edison and the coming of electric lights to the big apple.
Director Monte Belle never became a household name having only directed a little over a dozen films in his short career. The film is certainly a charming one with a nice mixture of drama, bitter-sweet romance and of course some levity to break things up. Monte film is rather static in terms of camera movement but he does employee some techniques like flashbacks which helps the film feel less stagey (and this actually is based on a stage play). I also liked the use of the three-strip technicolor process to highlight certain scenes. You know its a bigger budget affair when early films would use this special and expensive process.
The film highlights the feelings about immigration by the Irish in New York. In fact a pretty large sequence involves a political riot complete with brick throwing. Even though they are generally cast in a good light the film does lean into ethnic stereotyping which can feel pretty cringe-worthy. Davies who at this point had starred in over 20 films for MGM feels like she truly at home and at ease as an actor. And, I will say that in terms of her acting she is probably more subtle than most silent actors of the time.
The film is not without its weaker points which comes from holes in story and characters that felt like they could have been better fleshed out. Things like the entire Edison subplot felt like it could have been folded into the main thread better. But, I think that the movie is interesting enough with to overcome these shortcomings. Davies dazzles and the movie has a lot of heart.
Picture: Kino Classics has provided film fans with a nice brand-new 2k transfer derived from the Library of Congress's 2018 35mm preservation. Its worth noting that also included is the rare three-strip color tinting sequence that was restored as well. The film for being nearly one-hundred years old looks fantastic.  Of course you get some image flicker and artifacts and scratches but even these are well maintained. The three strip color sequences seem to have been the most damaged as they are by far the roughest looking points of the film. Again, its nothing that is distracting and its a small miracle to even have these scenes intact at all.
Sound: Broadway has a 2.0 track and a great score by composed, arranged and conducted by Robert Israel.
Extras: Broadway includes a interesting commentary by historian Anthony Slide. An overall engaging and well researched track.
Posted by The Video Attic at 8:02 AM