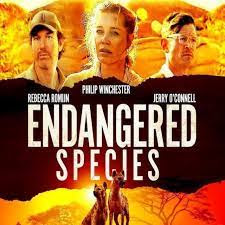 Its never a great thing when taking notes on a review the word 'Why?' is written and underlined. Such is the case with 2021's Endangered Species. A wealthy American family goes on a self-guided African wilderness tour without a guide or protection. What could possibly go wrong? When a rhino charges their car they are left to survive in the elements. Before I get into the numerous issues I want to first express what I think works about this movie. First and foremost the acting is excellent. Endangered has a lot going on in terms of emotional through-lines and each actor pulls their weight. Thankfully, no one over-acts scenes nor is anyone wooden or under-selling the situation. Normally I would mention the actors that stood out but honestly they all did a fantastic job. Cinematographer Brendan Barnes does an excellent job at captures the stark, unnerving but ultimately stunning locales. Whatever I may think of M.J Bassett, you have to give him credit for being able to craft some truly tension filled moments.

So...This is probably where the positives end. I keep coming back to the, 'Why?' of it all. This movie is a standard people going into a foreign land, making dumb choices and getting stranded or hunted and, in this case both. The film actually starts off fairly interesting with a solid family drama weaved into a fight for survival. Hell, they even had a male-gay character (more on that later). The thing is the writing isn't overtly bad, its just incredibly bland. Seriously, this movie never subverts or challenges in a way that elevates the material. Worse yet M.J Bassett uses the film to preach on a issue that is already well established and covered. Messages in movies are great but this one shoves it down your throat. Tepid and cliched writing plagues and pulls down any momentum that is set up in the first act.

As I mentioned they have a gay character but, of course they don't give him a love interest (because that would make it too real) and it feels like his sexuality is only used to up the already high emotional stakes. It feels like at best its woefully misguided pandering and at worst feels like the filmmakers giving themselves a great big-back on the back for being 'woke'. As someone who is Queer I found it not progressive but a rather eye-rolling bit of virtue signaling. Unhinged is a 2020 movie that had a thread worn 'one-bad-day' premise  but did enough interesting and bonkers stuff to keep it from feeling bland or boring. Endeared Species on the other hand brings nothing new to the table and worst yet preaches at you. Not fun, doesn't actually have anything interesting or new to say.  Honestly, its the kind of movie I'm glad I took a lot of notes for because its that forgettable. Best to leave this endangered.