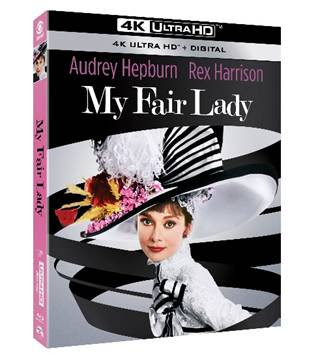 1964's My Fair Lady directed by the legendary George Cukor seems to be genetically engineered to win Oscars, having won eight of them including Best Picture beating out films like Beckett (1964) and Mary Poppins (1964).   Most of my regular readers (all three) will know that I've been trying to broaden my film horizons and give musicals a fair chance. Based on the George Bernard Shaw play Pygmalion with book and lyrics by Alan Jay Lerner My Fair Lady was made on a budget of seven-million and grossed over seventy-two million plus untold millions its made over the decades on home video. The film tells the story of Eliza Doolittle (Audrey Hepburn) a lower-class flower girl with a thick cockney accent. Her life will change during a chance meeting with a snobby Professor Higgins (Rex Harrison) wagers that he cant make her into a prim and proper lady with perfect diction.

Shaw's play was a huge hit so  it seemed only a matter of time before a big budget Hollywood adaptation would come along. And, I think that film takes the best of the musical whilst also softening the rougher edges of of the Pygmalion play. I have to say even going into not being a huge musical fan I did really enjoy the songs for the most part and I think that the story and characters are engaging and compelling enough to carry me through a nearly three-hour long runtime. Audrey Hepburn gives such a dazzling performance in one of her most iconic roles outside of Breakfast at Tiffany's (1961). The emotional weight and core of the musical rests on her shoulders and Hepburn seems to sail through what was no doubt a demanding and difficult role. Rex Harrison is equally great and, like Hepburn has to flex his emotional range as well as his singing voice. And, of course you have a host an amazing actors and honestly there is not a sour performance or note to be found by anyone.

Its a credit to Cukor's amazing director that he could pull off such a big-lavish production with grand set pieces yet, makes the movie deeply personal at the same time. It also helps when you have a top-notch crew including production designer, cinematographer, lyrist etc. This movie is a well oiled machine where every single element coming together incredibly. You might even make the case that the movie is nearly perfect. I think what honestly keeps me from truly loving this movie is how the film gives a lot of agency to Eliza only to seemingly go back on that in the end. Its like this weird tag-of-war where it wants to progressive and also pulls it back to be regressive as to not alienate its older audience. It feels like it wants to have its cake and eat it too.

Even if you don't like musicals I think that the film is engrossing, dazzling and charming enough that its hard not to get swept up into its spell. The movie is in my opinion isn't flawless but very nearly there.

Picture: Paramount has been doing an excellent job at taking their treasure and polishing them up on home video! And, I must say that My Fair Lady is certainly among the studios crown-jewels in terms of an excellent picture presentation. The film which is over fifty-years old at this point looks stunning! The film which won the Oscar for best Costume Design (Cecil Beaton) and Color Cinematography (Harry Strading Sr.) is everything a UHD release should be. The image is pristine of course without a sign of artifacts, scratches etc. But more impressive is the color that is nicely graded. Colors pop yet thankfully it doesn't look overly bright or have an over processed look to it. Its clear to me a lot of hard work and thought has been put into this picture overhaul.  Skin tones natural and have a nice warmth to them. Small details like clothing textures really are a sight to see. This transfer really and truly highlights the amazing production design, costumes and cinematography.

Sound: Like the visual presentation Paramount has taken great care with its audio presentation. We get a wonderfully big and bold TrueHD 7.1 track that really fills a room.

Extras: Worth noting that all extras are included on the Blu Ray disc and includes:

Theatrical Featurette's: The Story of a Lady, Design for a Lady, The Fairest Fair Lady