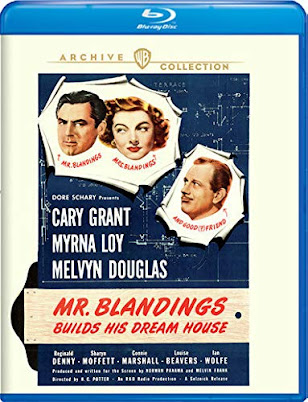 Right off the top I have to express that when they announced that 1948's Mr. Blanding's Builds His Dreamhouse was coming to Blu Ray I let out an audible and probably embarrassing cry of joy. Obviously I will get into why I adore this '40s era film but, its been a firm favorite for probably six-years or so. I even got to meet Sharyn Moffett who played Joan Blanding at Monster Bash Convention a few years back. It was a nice experience and the 80+ year old former actor (who had her daughter by her side) had some fun stories to tell about this role and also her small but memorable role in the Lewton produced The Body Snatcher (1945). She acted next to Boris Karloff no less.

Jim (Cary Grant) and Muriel (Myrna Loy) have two kids and a cramped New York apartment (which is actually way bigger than most NY apts/and incredibly valuable as NY property goes) and, decide that instead of re-modeling they will move and build their dreamhouse. Meanwhile Jim who works as an ad-man must come up with a campaign slogan all whilst juggling the stress of overseeing his castle. Hijinks ensue in this roaringly funny comedy.

Blandings  is a masterclass in snappy dialogue and comedic deliver and, in my opinion is every bit in the class of His Girl Friday (1940) in terms of razor-sharp witted '40s cinema. Yet, the movie (written by Melvin Frank & Norman Panama the duo behind White Christmas) also has a real beating heart expertly folded into the sometimes absurd proceedings. It features small but relatable moments that make the movie feel warm and accessible. Screenwriters could also take a lesson from the script which has not an ounce of fat or filler material in sight. Every scene, every line of dialogue is in service of character development or to keep the brisk pace moving ever forward.

Though Loy and Powell were among the most famous on-screen couples I think Loy and Grant really dazzle here. The pair I think equally shine and both bring something to the table. Brimming with swagger and charm Cary Grant serves up a surprisingly believable working-class Joe and, in typical Grant fashion brings a dry and sardonic humor. Loy on the other hand brings a real warmth and motherly love to the film but also never plays a "stereotypical housewife" as she has agency and fire when she needs to.

Melvin Douglas also shines. What's brilliant is Douglas's character acts like a perfect audience stand and, though he's in a glorified sidekick role and is just as funny and charming as Loy and Grant. Its among my favorite of Douglas's films. Like most films of this era it is chocked full of great supporting roles such as Reginald Denny (Rebecca), Tito Vuolo (The Killing), Nestor Paiva (Creature from the Black Lagoon) and Lurlene Tuttle who famously was in Hitchcock's Psycho (1960).

Mr. Blandings is one of those comfort films that I can put on in a bad mood and instantly be brought out of it. It's a film that truly is lightening in a bottle with everybody both in front of and behind the camera doing their very best work. If you`ve never seen it I would say its certainly in my humble opinion among the best comedies of the '40's.

Picture: Mr. Blandings Builds His Dreamhouse has a nice brand-new 4k scan. Like many of their other 4k scans its really difficult to find anything to fault here. The picture has been scrubbed clean of any artifacts, scratches. Grains have been nicely smoothed out and generally the picture has a pristine look to it. Small details really pop out and, having seen this on DVD for years I am here to say its well worth the upgrade.

Sound: Blandings has a nice 2.0 track. Dialogue, score and sound design comes through nicely without any unwanted background hiss or audio drop out. Another stand up job from Warner Archive.