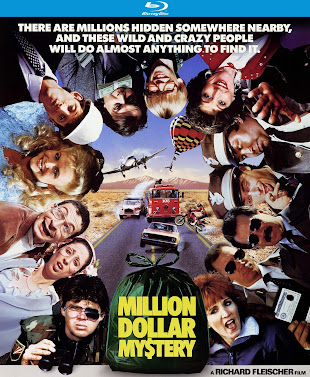 Million Dollar Mystery (1987) cost a whooping ten-million dollars and made barely a million dollars (Oh, the irony) at the box office. It also holds the rare honor or rather dishonor of having a zero-percent rating on Rotten Tomatoes.  The "plot" centers around a band of misfits all looking for a buried million-dollars. Meanwhile the FBI are hot on the trail of the money.  Despite this films rather notorious reputation I thought it was only fair to totally go in with any open mind. The movie was pretty much what I expected. To the film and Richard Fleisher's credit the movie moves at a nearly break-neck speed, delivering numerous gags and running jokes. You can tell that Fleisher is trying hard to make this thing work- and it just doesn't.

Where do I even begin? First off I think what I resent about this movie is it is clearly trying to be It's A Mad Mad Mad Mad World (1963) as the plot is basically the same. Yet, Richard doesn't have even a  small fraction of Stanley Kramer's talent and the movie doesn't begin to have the same magic and charm of its 1963 original. That might sound a bit harsh but the movie doesn't even try to hide the fact that the movie has nothing new to offer. Nor does it try to hide its mountain of influence and its not above making obviously references and outright quoting other better films. It doesn't help that the plot is aimless and the writing patently unfunny. The problem is the jokes are either too silly or just corny. It kind of blows my mind three different writers worked on this film.

Besides a few notable the cast is largely unknowns or cult actors that never really made it big. I will say that the acting is really not that bad, especially given some of the dialogue that the cast was straddled with. I will say that the movie did have a few jokes that were actually pretty funny. And, for as paint-by-numbers as the plot is it did manage to have a few clever twists up its sleeves. I just wish that the filmmakers took the time to develop the plot more. Overall, its a pretty forgettable film but one that has its loyal cult following. Its honestly far from the worst movie I've ever seen and its a fairly breezy watch. Though, not one I would likely want to re-visit any time soon.

Picture: Million Dollar Mystery doesn't seem to have a 2k scan but the film actually looks pretty good on 1080p. The image is vibrant and not dull or lifeless. The film also seems to have been cleaned up with no scratches or artifacts to been seen. It certainly helps that the film is under forty-years old and it seems the original material has been kept in good condition. For fans of this film I think you will be pleased with how this visual transfer looks. Grain is even fairly smooth and not chunky in places.

Sound: Million Dollar has a DTS 2.0 track. Dialogue, score and sound design comes through nicely. Like the film presentation the sound is on the hearty side and pretty good for a standard 2.0.

Extras: Extras include a commentary by film historian and author Bryan Reeseman. I have listened to other tracks by Reeseman and they are always well informed and engaging.