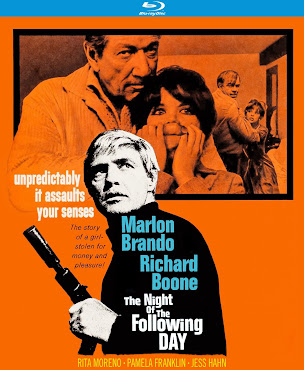 Described by Joe Dante as "off-beat" The Night of the Following Day (1969) is about a group of criminals including Marlon Brando known only as Chauffer and Leer (Richard Boone). Director Hurbert Cornfield never really made a name for himself in cinema outside of some cult films such as The Night of the Following Day. The shoot was notoriously difficult with Brando famously tried to sabotage the film and this is something he was known for, including the infamous The Island of Dr. Moreau (1996).

Brando had this weird period where it was in between his glory days in the '50's but before he would return with hits like The Godfather in the '72 and later Superman (1978) and Apocalypses Now (1979). Right away Cornfield establishes a really strange tone with shots that are drab and melancholy. This strange vibe is intermixed with this swinging '60s caper. The movie isn't what I would call plot-heavy but it has enough action and intrigue to keep it engaging.  And, Cornfield in my opinion does a decent job at crafting tension and action set-pieces. The film is also nicely photographed by Willy Kurant. The movie seems riff for sleaze but the film is rather restrained in this regard. Maybe too so for its own good.

Despite a few over-the-top moments Brando gives a mostly subtle performance and honestly its one of the better ones from this weird period in his career. It was really interesting to see the legendary Rita Moreno whose credits include such classics as West Side Story (1961) and The King and I (1956). Moreno like Brando gives a understated but effective performance. Genre favorite Pamela Franklin is also great in a role that sadly didn't give her very much to do. But, I think its Richard Boone (I Bury the Living) who really steals the show. Boone's character further gives this movie a off-kilter vibe and he is chilling without being so obvert about it.

The Night of the Following Day is not what I would call a brilliant movie and for all its charms it seems like it could have used a punchy plot. I almost wish they would have just went very Euro-sleaze/weird which the movie flirts with but never fully commits. Still, as I said above its still an entertaining watch and the movie never really goes the way you`d expect. The finale is certainly one that has divided people. Worth a watch, if only for the late '60s oddity that it was.

Picture: The Night of the Following Day is certainly seems like its a step up in terms of clarity from the previous early 00's DVD release. The film has a noticeable uptick in color and clarity. Though some  scenes do suffer from lack of definition and blurring. There are some some artifacts present but nothing that is overly distracting. Overall, a good but not great transfer but, as I said one that is at least a step up from previous releases.

Sound: The Night of the Following Day has a nice DTS 2.0 track. Dialogue comes through nicely as does the score and sound design.

Extras: Night of the Following Day contains two commentaries: A new commentary by Tim Lucas and a second from director Hubert Cornfield. Also includes a Trailers from Hell w/Joe Dante and Theatrical Trailer.