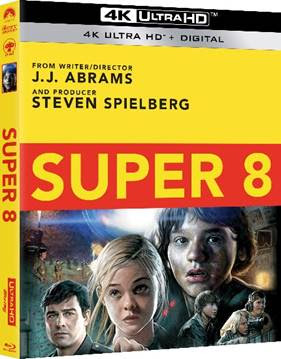 Steven Spielberg is a filmmaker that firmly established his style and talent early in his career.  Duel (1971) the directors first feature film (made-for-TV) set the stage for his raw talent to craft an excellent story and tension. And...of course he made a little movie called  Jaws (1975) which forever re-shaped Hollywood and created what we now know as the Summer Blockbuster. It wouldn't be until E.T (1982) where the director would perfectly distill childhood wonder in the backdrop of science fiction. This formula has often been replicated but never, in my opinion fully duplicated.
It seems only fitting that that Spielberg produced a love-letter of sorts to E.T and his other films with Super 8 (2011) directed by every Star Wars fans worst nightmare J.J Abrams. All jokes aside I probably haven't seen this film since it was a new release and after the hype and semi-backlash it was interesting to re-visit this film for its tenth birthday. Its weird to think that this movie, which is  a shrine to childhood innocents of building monster-model kits, seemingly endless summers, making movies with friends and of course aliens was released five years before the Netflix smash-hit Stranger Things (2016-) series. In a way the movie feels like the early part of the wave of nostalgia for the '80s and later on '90s.
Super 8 is that rare movie of someone clearly paying not so subtle homage to other films yet, actually feels like it is made well-enough to stand on its own two-feet. The film is incredibly fast paced yet to Abrams credit the movie also spends time developing the story on a emotional level whilst also building an inquiring mystery. While the movie does have some nice action-set pieces it doesn't sub them out for  plot and real motivation. Since were on writing I think this movie is nearly perfect in its set up, building of tension and release. At nearly two-hours the movie is brisk and entertaining but never feels like it has to sacrifice story in the process.
And, wow, I don't think this movie gets enough credit for such a spot-on production design that perfectly captures not only 1979 small town but also a feeling. Speaking of, while the film is set in '79 I love how the movie also offers up a nice throwback to Cold-War era sci-fi films that no doubt influenced people like Spielberg or his friends like Joe Dante (Gremlins). One thing Abrams has been rightly criticized  in the past for is being able to replicate style without really injecting his own. I think that here his full set of skills in storytelling and filmmaking are on full display. Abrams is hyper-focused here and you can see he puts a lot of rich details. The end result is a world that feels painfully real and mundane -until all hell breaks loose with the train. Speaking of, that sequence is incredible and doesn't get talked about nearly enough. Its hard to understate just how visually interesting the film is with a big scope yet somehow never loses its focus on its deeply personal story. This may seem easy enough but it takes a real writing skill level to pull off that juggling act. Its worth noting that the child actors are amazing and, honestly I couldn't find a single poor performance from anybody.
Super 8 is a movie with thrills but tells a damn good story at the same time. It was really a blast re-discovering this film and I was happy to find out it holds up really well.
Picture: Paramount has been a studio that has been dong a great job at taking films from their catalogue and re-releasing them in the latest and best format. Visually as well as thematically this movie harkens back to the late '70s and the movie rightly has a nice film-like quality to it. It was actually really awesome to see that Super 8 has a film-like look with smoothed out grain. The movie has a warmth to it visually and the UHD transfer I think captures that nicely. Darker lit scenes also really showcase a step up in terms of overall clarity. Super 8 is only ten years old so the movie always looked good but I think that this still is an improvement over the 1080p release.
Sound: Super 8 is a movie where score, sound design and effects are important and wow, this TrueHD 7.1 offers a complex 3D sound. Sadly we didn't get an Atmos track here but I am impressed with this sound presentation nonetheless. During the bigger moments, including the train explosion you could really hear and even feel the power from all directions.
Extras: Super 8's extras have been ported over from previous releases and includes: Commentary by JJ Abrams, Bryan Burk and Larry Fong, Featurettes, Deconstructing the Train Crash, Deleted Scenes and Credits.
Posted by The Video Attic at 7:18 AM