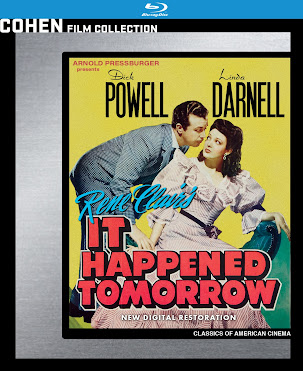 Following the hit that was I Married a Witch (1942) Rene Clair made a war film with six other directors called Forever and a Day and, after that made a solo film It Happened Tomorrow (1944). The movie follows a young reporter named Larry (Dick Powell) who finds he can read tomorrows paper a day early. With this he uses it for personal gain which almost instantly lands him in hot water. Aided him is a woman named Sylvia (Linda Darnell) who works as a phony physic.
Rene's It Happens Tomorrow feels like a proto-Twilight Zone television episode crossed with a breezy rom-com. Indeed, the movie has sharp dialogue and the wit and charms that resembles an Ernst Lubitsch film without actually being directed by him. The movie is a high-flying hijinks kind of comedy that was just the light-affair audiences wanted during WWII. Dick Powell (Murder, My Sweet) brings a lot of charm to the role and showcases his wide range of acting skills. Linda Darnell (Fallen Angel) is equally as good and her and Powell have chemistry and play off of one another nicely. Its a tragedy that Darnell only lived to be 41 as she had beauty and talent in equal measures. It also features a top-notch supporting cast including Jack Oakie (The Great Dictator), Edgar Kennedy (Duck Soup) and Edward Brophy (Freaks).
As much as I enjoyed the film I will say that certain aspects of the plot feel underdeveloped. Indeed, aspects of the narrative feel just a tad bit rushed for its own good. Still, even if the plot could use a little of polish its the movie has a lot to love about it. Rene embraces the absurdity of the premise and really has a lot of fun with it. The movie keeps a nice lighthearted tone throughout and features some wonderful fast paced-comedic gags. Couple this with Clair's pin-point direction and you have a joyful, whacky romantic comedy.
Picture: It Happened Tomorrow has a brand-new 4k scan. This movie which is over-seventy-years-old looks great in 1080p. The overall image has a nice contrast in the black-and-white photography and showcases the excellent work by Eugen Schufftan (The Hustler, Eyes Without A Face) and Archie Stout (Fort Apache). There is some slight artifacts but overall its a nearly perfect looking visual transfer.
Sound: Tomorrow features a 2.0 track. Dialogue, score and sound design comes through nicely with no unwanted background noise or audio drop outs.
Extras: Trailer
Posted by The Video Attic at 9:14 AM