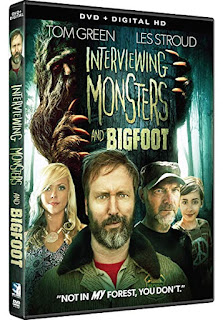 Before I get into this review I want to say, I am a fan of absurd comedy-when its done right. I also grew up with the antics of Tom Green who was a quirky superstar in the '90s. A well regarded profession makes it his mission to track down the bigfoot that killed his wife. Enter in a cast of weirdos, rednecks and big men. Writer, director Thomas Smugala crafts the movie equal to a child screaming directly into the viewers eyes and ears. At nearly two-hours the hapless viewer has to wade through a muddling nonsense plot, crass unfunny jokes many of which have to do with farting, peeing and poop. Oh yeah, Thomas really has a thing for poop jokes and showing off poop in various forms.

Dated, cringe-worthy, and tasteless humor are substituted for clever jokes, wit and comedic timing. They even "borrowed" the bigfoots dick joke from 2004's Anchorman and it made me sad that I wasn't watching that movie instead. I'm all for outrageous comedy ala Nick Zedd or even Giuseppe Andrews (for the most part) but this felt forced, annoying and wholly bad and not in a so-bad-its-enjoyable kinda way. It doesn't help that all the characters are grotesquely unlikeable. A way past his expiration Tom Green mumbles and sleepwalks through what could be generously called a performance. Everyone in the cast is all over the place, even under acting or over. Les Stroud who curiously has more writer credits than acting actually does a fairly decent job. I also think I for the most part liked his character the most.

Interviewing Monsters and Bigfoot feels very much like a missed opportunity. The idea of weird redneck hunters is riff with comedy gold and I actually think that this would have worked much better in a mockumentary format. I will say that I respect Smugala going completely and totally all in on the absurd, borderline surreal aspects of the film. I just wish that more care was taken to streamline the plot, be more character focused (which is hard because you have a lot of characters) and toned down the middle-school humor.

Interviewing Monsters and Bigfoot could have been a fun Christopher Guest style movie but instead is misses the mark. The plot is aimless and nonsense, the humor is grating and the film at nearly two-hours is bloated.

Picture: Monsters was mostly likely shot on digital and actually looks fairly good on non-HD DVD. Images are sharp and being digital you don't really get any of the blocky, low pixelated image.