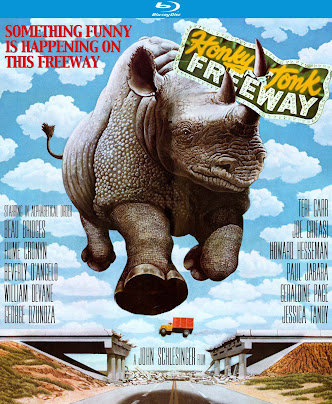 Honky Tonk Freeway (1981) was made on a staggeringly big budget of twenty-four million (which was the most expensive production at the time) and tanked hard at the box-office. The film has gone onto become a cult classic. A scheming Major named Kirby Calo (William Devane) bribes an official to get a ramp built through a small town of Ticlaw for tourism. When he is double-crossed the town takes matters into their own hands in this whacky comedy.

Director John Schlesinger best known for classics like Midnight Cowboy (1969) and The Marathon Man (1976) directs what could loosely be considered a half-baked attempt at a satire of American small towns but its a mixed bag. Part of me respects the attempt made by Schlesinger at a black-comedy that takes its aim squarely at the idea of the American dream and capitalism. The problem comes from the screenplay that tries at a half-hearted attempt at biting satire but doesn't ever go deep or far enough to be effective.

It baffles me that a huge budgeted film like Freeway was trusted to first time screenwriter Edward Clinton. Clintons only other screen writer credits prior to this was for four episodes of the soap-opera Another World. It feels like there are some interesting ideas but they are never fully formed. The end result is a movie that is aimless and tiresome at times. I also kind of did a double take when I saw this movie cost over twenty-million dollars as the movie doesn't really look expensive. I've actually seen better looking films that cost a fraction of this films budget.

I will give the film credit, it has some really funny bits but this bucks up against the mostly unfunny or dull moments. I think what for me was the highlight of the film was the amazing actors. Teri Garr (Young Frankenstein), Beau Bridges (The Landlord), William Devane (Rolling Thunder), Beverly D'Angelo (National Lampoons Vacation), Howard Hesseman (WKRP), even  future wet bandit Daniel Stern (Home Alone) and Peter Billingsley (A Christmas Story) show up.  It also has vets like Jessica Tandy (The Birds) and Hume Cronyn (Shadow of a Doubt).

Honky Tonk Freeway, much like Million Dollar Mystery (1987) (Review HERE) is a comedy that tries for lofty ambitions, cost a ton but ultimately failed with critics and at the box-office. I will say that Honky Tonk while a woefully misguided attempt does have some interesting themes and ideas going for it. The same cannot be said for Million Dollar Mystery.  Again, I come back to the sheer insanity of giving this much money to a non-IP (this movie wasn't based on any popular property-not even a book) and, then entrusting that to a screenwriter who had no previous experience. Furthermore, it had an A+ director at the helm.

Honky Tonk Freeway has a certain strange-charm which I think helped me get through the head-scratching screenplay. As I said it has a nice loyal cult following and, I certainly am not judging those who dig this. For me it could have used a better and more established screenwriter and a more streamlined narrative.

Picture: Honky Tonk Freeway has a 4k scan. The film which turns forty-years old this year looks good. The colors are bold and the grain is smoothed and not chunky or blocky. Freeway has a few blurring moments but nothing that is at all distracting. Overall, this is a good transfer and the image retains a nice sharp clarity for things like costumes, sets and locales. The film isn't the most visually exciting but this 4k scan looks damn good.