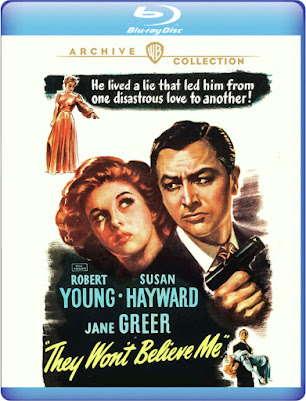 1947's They Wont Believe Me is really interesting in the realm of film-noir in that it was produced by a woman, Joan Harrison. Harrison is considered an amazing writer in her own right having penned such Hitchcock classics such as Rebecca (1940), Foreign Correspondent (1940) and  Suspicion (1941) (among others) and acted as associate producer on other noir classics like Phantom Lady (1944). The movie also doesn't have a femme-fatale a standard troupe in the noir-movement. Told mostly in flashback womanizer Larry (Robert Young) is on trial for the murder of his girlfriend. What sounds like an improbable chain of events is recounted by Larry on the witness stand. But did he kill his girlfriend or not?
They Won't Believe Me doesn't have the typical noir-flourishes of smoky bar-rooms, private eyes and seductive women but, thats not to suggest this isn't ever bit of a top-notch noir. Screenwriter Jonathan Latimer (The Big Clock) pens a tightly woven twist-and-turn filled murder-mystery that keeps you guessing every step of the way. What is pretty amazing is how the film features smart female characters with agency. This no doubt was helped by Joan Harrison. Though she had no screenwriting credit I cant imagine that Harrison didn't do any uncredited work in shaping the films more Hitchcockian touches. The movie clips along as a methodical pace and though it may be considered a little slower than most noirs the film certainly lays the ground work and builds to its shocking finale.
For as much as I liked the overall plot and structure I did feel like this was sort of a lack down in areas. As I said the movie is indeed very clever in its twists but for me the movie lacked suspense. Certain scenes didn't have that punch that someone like Hitchcock or Fritz Lang would have added. Moreover, there are plot points that could have been explored in greater depth.
They Won't Believe Me is a noir that kept me guessing the entire film with a finale that was a gut-punch! A must-watch!
Picture: Once again its really hard for me to heap anything but praise on a WA release. They Won't Believe has been restored in 4k and has restored the time to its intended runtime of 95 minutes. This added footage is in my opinion seamlessly integrated and looks great. The film is in black-and-white and the contrast is extremely well handled with virtually no artifacts or scratches to be found. Its always exciting when a movie is unearthed, especially a longer cut AND it looking incredible as well.
Sound: They Won't Believe Me  has a 2.0 track. Like the visuals the sound presentation is well handled with dialogue, score and sound design coming through nicely.
Extras: None
Posted by The Video Attic at 8:50 AM