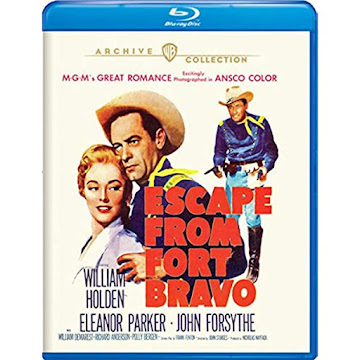 Capt. Rogers (William Holden) is a seemingly ice-cold disciplinarian at a Union POW camp called Fort Bravo. A pretty young girl named Carla (Eleanor Parker) comes into town seemingly for a wedding. But, in fact she is there to help break out Confederate soldiers, including her boyfriend. Things are made more complicated when Rogers falls in love with her.

John Sturges was certainly known for his 'manly-man' movies having worked mostly in westerns, action and war films. Escape From Fort Bravo from 1953 is a well directed film that packs in a lot of action and romance into its scant ninety-seven minute runtime. The pace is really well handled with enough time for developing characters but also it never drags, knowing just when to bring on the shoot-outs and rough-and-ready fights. Though, the movie isn't as one-note as I initially thought and I have to give Sturges and screenwriter Frank Fenton credit for setting up Rogers as a complex character and also the emotional stakes with Carla.

Still, its not to suggest that the movie is groundbreaking in regards to subverting tropes and the movie is very much a standard western where you have a flawed but noble hero, in this case Rogers played by William Holden and that, the common enemy is Native Americans. I know this was very much a product of its time-it still makes me cringe. The movie isn't deep but Fenton gives us just enough motivation to be invested in the characters. William Holden gives a good performance as Capt. Rogers  and as I said he is given enough weight to his role to allow him to play up the nuances. Eleanor Parker probably best remembered for her role in The Sound of Music (1965) also shines in her role. This also features a great supporting cast from John Forsythe, William Demarest and Polly Bergen. Bergen its worth noting how quite an interesting career starring in everything from the original Cape Fear (1962) to John Waters Cry Baby (1990). She had over eighty-credits to her resume when she passed away at aged eighty-four in 2014.

The movie also has impressive production design, three-time Oscar winner Robert L. Surtees gives the film a grand scope with his photography and Jeff Alexander gives a wonderful score. The movie might lack depth but it tells a good enough story and has so much talent behind it that I think I can forgive some of its shortcomings.

Picture: Escape From Fort Bravo is yet another 4k scan The film in another flawless looking film for Warner Archive. No artifacts or scratches to be found and the color tempt is steady throughout. I will say the film lacks some definition with a soft-look to it. I think that might be just in how it was filmed which WA has no control over. Its certainly a case of an excellent transfer that showcases the films technical merits.