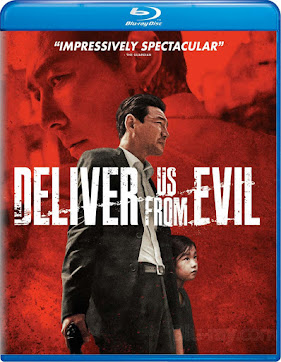 An assassin named In-nam (Jung-min Hwang) is about to retire to Panama to track down the daughter of a former girlfriend who was a victim of kidnapping. A trans-woman named Yoo-Yi (Jeong Min Park) is hired as a translator in order to get her gender conformation surgery. The pair follow the trail which leads to a final showdown between a man called The Butcher, who happens to be the brother of one of In-nam's victims. Deliver Us from Evil (2020) seems like a pretty-by-the-numbers action film and whilst in a way it is, writer, director Won-Chan Hong has a few tricks up his sleeve.

The narrative about In-nam and his past relationship, and how this plays out with his daughter is the best thing going for this movie in terms of an emotional core. Its cliched but I think its just compelling enough for Hong to nicely thread the plot together. Probably more interesting is the film has a trans-character that has agency and is actually not in the movie to be mocked but rather has a real impact on the story. If I have to be nick-picky I would say that where this movie falls is that it feels like it rushes or glosses over certain plot points such as the love affair In-nam has with the mysterious woman that sets the entire plot into motion. Certain plot holes don't help matters much either.

However, I think that I was able to forgive a lot because the film is skillfully directed and, the writing is actually fresher than you might expect, especially within the action genre. Won-Chan Hong subverts the genre whilst also embracing some of its well worn troupes. Deliver Us also features some truly kick-ass action sequences that is well staged and nicely edited. The pace is nearly breathless with a lot of killer with few little filler. Speaking of...The movie is bloody-as-hell but you can certainly tell that Hong was holding back on the gore which is a shame. I wanted the violence to be cartoon levels which I think would have fit the films tone. I would also be remiss if I didn't mention the outstanding photography by Kyung-pyo-Hong (Parasite, The Wailing). This movie has a very interesting look and feel like Hong certainly helps elevate the material with his laser-focus on visual detail.

Deliver Us from Evil is flawed in some areas but in all others excels. Its a pulse-pounding and surprisingly touching action film that changes up the genre in interesting ways.

Sound: Deliver Us from Evil really delivers a nice DTS 5.1 track. The film is of course very sound design heavy and this track supports all the gun-fire, glass smashing, neck-breaking sounds. Really excellent and provides in my opinion a layered presentation.

Extras:  Extras include Making Of, Filming Location and Trailers.