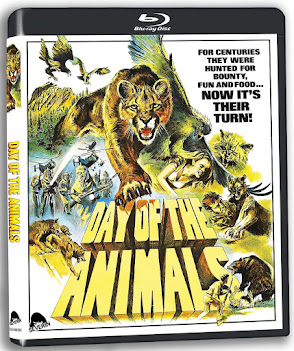 1976's Grizzly was a huge hit upon its release, being the most successful indie film until a little movie called Halloween (1978) dethroned it. It was clear to Girdler and co. that a follow up movie was needed. Day of the Animal was rushed into production and released just a year after.  A group of hikers must battle the very mother nature as the animals rebel in a savage struggle for survival. Just like Grizzly, I had heard  a lot about Day of the Animal but never actually seen it-until now. I have to give William Girdler some credit as he does a pretty good job setting up a foreboding atmosphere that sets the table for what the audience is in store for. When we finally get the first major attack/death of the movie its a properly intense experience.

DotA was made with a slightly bigger budget after the success of Grizzly, yet was still made at a scant 1.2 million. The movie certainly uses its money wisely and the overall product certainly has a bigger feel and scale with more characters, extras and effects. But, I actually think that Grizzly is the overall better movie but its not to suggest DotA doesn't have its own cheesy charms. Leaping attack rats and a hairy bare-chested Leslie Nelson battling a bear (and being the worlds biggest asshole) is just a small fraction of the cheesy delights within. -its worth noting that Nelson gives a Nick Cage level performance by the end. Not to mention a shrieking Ruth Roman as an overbearing mother. I think the biggest issue this movie has is its terribly paced with some cool things happening followed by drawn out filler scenes. This tends to be the case in Grizzly as well but that film seemed to have a more streamlined narrative.  A larger cast also means that we don't really get much character development but maybe thats asking for too much from a Girdler production. Also, your mileage may vary but the movie is a bit overly preachy.

The thought was that if people flocked to see a movie about one animal on the rampage it only seems logically that more animals going crazy on people would equal double the profits. While this movie reportedly did turn a profit, only just barely, grossing just over two-million dollars. Sadly this was to be the directors second to last movie, having tragically been killed in a freak accident at only thirty-years old. Day of the Animal is a deeply flawed film due to its pacing issues but is just weird and wild enough to be damn entertaining nonetheless.

Picture: Day of the Animal sports a new-2k scan and I have to say it looks fantastic. The movie was largely filmed outdoors and this crisp new visual presentation really showcases the stunning photography. Colors pop and are well balanced and the overall film seems to have a nice uptick in clarity. Just like Grizzly Day of the Animal doesn't look overly processed. Artifacts and scratches have been cleaned up considerably and the film isn't overly grainy. A really impressive visual presentation.

Sound: Much like Grizzly, DotA's 2.0 track packs a big punch. Dialogue comes through incredibly strong, as does the sound design and score. Very nicely done.

Something Was Out There: Day of the Animals 30 Years Later (21mins) Released in 2007 this archival documentary is fantastic and has great interviews.

Also rounding out the features is an Alternate Opening Title Sequence -Something Is Out There, Radio Spots, TV Spots and Trailer.