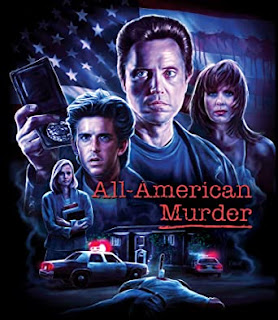 Disclaimer: Vinegar Syndrome has provided me with a copy of this film free of charge for the purposes of review. All opinions contained within are my own honest reflections.

All-American Movie (1991) comes from Happy Days series actor Anson Williams (in his feature film debut) and, has been a video oddity until getting a limited DVD release which is currently OOP. Vinegar Syndrome has re-released this on Blu ray but is it worth re-discovering. Artie Logan (Charlie Schlatter) is a outcast from a wealthy family.  His pet snake was burned by his dormmates resulting in the dorm being torched. Artie was blamed and kicked out of school. Now at a new school he falls in love with Universities head cheerleader. When his now girlfriend is burnt to death Artie is blamed and must prove his innocence.
The movie starts off like a weird, surreal scene inside a prison cell and then then violently shifts into a cheesy '90s sitcom. All-American Murder has a host of problems which I think is emblematic of a novice filmmaker and lackluster screenwriter. The film is a scattered mish-mash of bargain basement neo-noir, a hint of giallo and incredibly cheesy '90s made-for-tv-movie. The dialogue is at times eye-twitchingly bad and the film is bogged down by weird filler material. Also Mr. Williams film should be a case study in film school in how to not use needle drops in film. Its a shame because this was rumored to be directed by the great Ken Russell. I think Russell could have handled the tone and obvious streamlined and overhauled the messy screenplay.
Its even more frustrating when you realize that the film has an excellent cast including Christopher Walken, Joanna Cassidy and Richard Kind. Even Charlie Schlatter turns in a solid performance. All these great actors really do their best with the cheesy and painfully droll dialogue. I will say that the mystery is somewhat engaging but its hard not to be distracted by everything misguided.
All-American Murder is an interesting whodunnit but is bogged down by a weird tone, horribly dialogue and pacing issues.
Picture: All-American Murder is sporting a new 2k scan. This is certainly a case of the movie looks way better than it probably has any right to. Scratches and artifacts have been cleaned up and the movie retains a lot of detail and clarity. Stuff like costumes, locales and sets really have a sharp definition. I didn't notice anything in the way of blurring or lose of def which is no doubt helped by a 2k scan. An overall fantastic job.
Sound: Vinegar Syndrome always has really nicely done sound transfers. All-American Murder is no exception. The 2.0 track is strong and dialogue, sound design and the score all come through crystal clear with no drop out issues.
Extras: All American Murder has a nice host of  extras including The Hysteria Continues commentary track, Being on a Team: A new Interview with Charlie Schlatter (15mins) and A Valuable Experience (14mins)  A new interview with cinematographer Geoffrey Schaaf.
Posted by The Video Attic at 7:59 AM