Sensation Seeker, A Chapter in Her Life 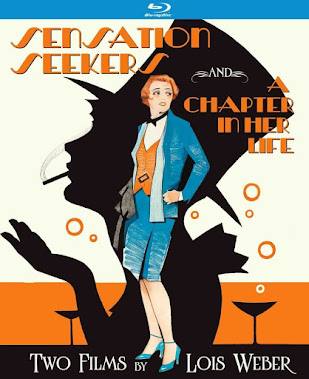 After a society girl from a wealthy family named Luena 'Egypt' Hagen finds herself in a scandal a local pastor named Rev. Lodge (Raymond Bloomer) takes her under-his-wing. The two find themselves in love with each other. Sensation Seeker from 1927 actually marks the tail end of Lois Weber's career as a filmmaker. In total she directed over one-hundred films and ended in '34 just as talkies were well and truly here to stay. I mention all this because when you view Seeker you can clearly tell that Weber knew her craft from sophisticated camera techniques, cross cutting and sharp editing. Weber also employed mature narrative elements like foreshadowing and subtle character building.  The finale is genuinely intense and incredibly powerful in my opinion.

Where I think the movie struggles is at a seventy-two minute runtime the movie doesn't take enough time fleshing out characters and plot. For example, the central conflict between the Lodge and Luena and their budding romance doesn't have a lot of time to fully form. Through broad strokes we get the sense of their love being frowned upon but again, the movie never takes the time to fully establish the stakes. It almost felt like a big chunk of exposition was missing. Sensation Seeker is a interesting and provocative slice of '20s flapper girl to modern-woman life. And while it is well crafted it just didn't feel fully realized and was missing key character moments. I rarely say this but, this would have been great remade with a longer runtime allowing for more story.

Picture: Both films were restored lovingly by Universal Studios. I have to say that the print given its age is incredibly impressive. We get a nice 2k scan and overall the picture has a nice clean clear presentation. Of course, the movie still has some artifacts and scratches but nothing that distracts in any way. I was noticed that the black-and-white temp. seems to be stabilized with no flickering that I noticed. Bottom line: I think Universal did a nice job and its great to see a big studio restoring their old silent films for film buffs both old and new.

Sound: I have to say I was very impressed by the audio here. The score comes through nicely and I really could not detect any hissing or background noise that you get in older films (especially '20s-'30s films). Like the transfer the sound is extremely well done.

Extras: Author of Lois Weber in Early Hollywood Shelley Stamp provides a treasure trove of well researched information in her feature length commentary. We get a crash course in the director and how groundbreaking her work was. Its a shame that A Chapter in Her Life does not include a similar commentary track.

A bitter old grandfather named Mr. Everingham (Claude Gillingwater) must watch his granddaughter Jewel (Jane Mercer) despite being estranged from his son and daughter-in-law. Similar to Sensation Seeker, Lois Weber showcases some very sophisticated storytelling devices and camera work and, its clear the filmmaker had truly honed her craft.

I felt two ways about this movie. On the one hard I think Weber makes a earnest attempt at telling a movie with a lot of heart and pathos. Indeed, there are some powerful scenes such as when the young homesick Jewel kisses her doll and the camera cuts to a shot of tears running down the toys porcelain face. The, at the time of the release nine-year old Jane Mercer is fantastic and, its a shame that the actress had such a short career. Yet, on the other hand, A Chapter is sickly sweet and I think that the movie leans a lot low-hanging heart strings to tug at. Your mileage may vary.

I overall enjoyed this movie and I think despite being kind of sappy there is a compelling drama at the heart of it.

Picture: As I mentioned above, Universal did both 2k scans of these films. Considering this movie will be turning one-hundred years old in a couple of years A Chapter in Her Life looks probably as good as its going to. The overall picture is clear but is plagued with scratches and artifacts. Again, this is not a slam on the restoration and I wager that a lot of work went into making it look this good. Because even with the flaws you can tell that the movie retains a nice level of clarity.

Sound: Like the other film, the sound is really good with very little to no hiss or unwanted background noise. The score comes through nicely as well.