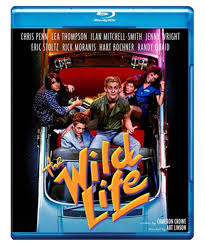 Cameron Crowe followed his screenplay for the hit film 1982's  Fast Times at Ridgemont High (based on his book) with 1984's The Wild Life. Bill (Eric Stoltz) and his friend Tom (Chris Penn) are on the cusp of adulthood and wanting to experience a slice of the wild life in this '80s time capsule. So, I have to say from the start that I'm not as nostalgic for '80s teen movies as some people are. Having said that I do see the appeal of some of these movies. Fast Times is, even for some of its elements that, shall we say haven't aged the best, a fun fresh film. Crowe's follow up, The Wild Life, will always live in the shadow of Fast Times which captured lightening in a bottle and became a zeitgeist defining film for an entire decade. Following that up was no easy task and...I don't think it works.
The Wild Life tries to draw from the same well as Ridgemont yet the film fails to re-capture that magic despite having a similar recipe.  For me the biggest issue is that I found it really hard to connect with these characters. Some were likable enough but mostly they are all kind of the worst. It also didn't help that their situations weren't as compelling this time around. This is not a reflection on the acting, which I think is where this movie truly shines. (More on this later). I also couldn't help but feel the movie has this a tonal problem. The scenes with Charlies Randy Quaid feels like something out of Rivers Edge (1986).
Like a lot of '80s teen movies  The Wild Life is a showcase for popular/up and coming young actors. The sadly now departed Chris Penn (who actually is quite fit here) has charm and talent to spare as wild-man Tom. On the flipside of that Eric Stoltz gives a lot of pathos to an overall thankless character. Lea Thompson, an '80s icon dazzles in her pre-Back to the Future (1985) role. This movie has great supporting roles from Jenny Wright, Ilan Mitchell-Smith and Randy Quaid and Rick Moranis.
The Wild Life is no Fast Times. But, despite its issues the movie is fun enough to be taken on its own cheesy '80s merits. It's also helped by a stellar cast.
Picture: The Wild Life which is nearly forty-years old at this point looks good on 1080p. The film overall has a nice amount of clarity that retains a nice amount of detail in clothing, sets and locales. The film does suffer from some heavy grain issues and a few blurring moments. It's not perfect but the uptick in color and visual quality is a leap forward in HD.
Sound: The Wild Life features a 2.0 track. The dialogue and sound design come through nicely and packs a decent punch overall.
Extras: This is a bitter sweet release as it features the last commentary by Mike "McBeardo" McPadden, author of Teen Movie Hell. Joining him on this track is author Ian Christse.
Rounding out the features is a Interview with Co-Star Ilan Mitchell-Smith, Radio spots and trailers.
Posted by The Video Attic at 9:17 AM