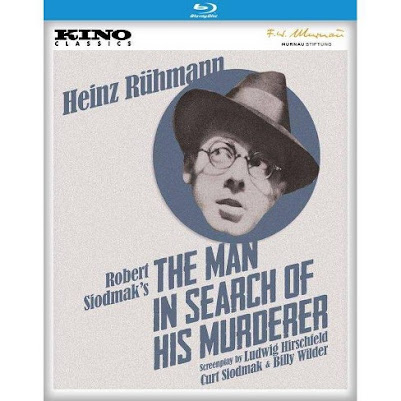 Warning: This movie touches on suicide/mental health issues.  Even though I handle the subject matter with tact its a major plot point and therefore I will be discussing it. If such things are triggers you may want to skip this review.
A man named Hans (Heinz Ruhmann) begs a thief to kill him as he does not have the nerve to do it. Later Hans regrets this and tries to track down his would-be murderer to undo the deal. Problems arise like the fact that his original murderer dies and sells the contract to someone else. From the outset I want to make it clear that this is a comedy, albeit a very dark one. In fact, the movie plays out its antics like a whacky Harold Lloyd silent film, minus the more elaborate sight-gags/physical comedy. Not only does this mark a very early movie directed by Robert Siodmak (The Killers, The Devil Strikes at Midnight) but also is written by Curt Siodmak (The Wolfman) and Billy Wilder who would go onto of course have one the most celebrated careers of the Golden Age of Hollywood, winning six Oscars and just generally being regarded at the very top of his field.
Here Wilder and Curt Siodmak truly gets to revel in their dark sardonic wit whilst Robert Siodmak, who would later be known for his Noirs complements their sharp writing with a keen eye for visuals and a handle on the quickly paced action. The movie features Robert Sidomak's trademark Noir style while at the same time being deeply cynical and a bit nihilistic. The final minutes is as mad-cap and fast moving as anything you`d likely seen in '40s American screwball comedies. In this you can see how ahead of the time Wilder and Siodmak was. The movie also does a fair bit of world building which again, is something that you really didn't see that much in early cinema.
If I were to complain I would say that at just under an hour I was left wanting a bit more in terms of story and character development. This sometimes feels like a first-draft, albeit a very good one. The over-the-top tone will is also going to be very polarizing. Also,  the fact that the entire premise is built around and trivializes suicide does tend to leave one with an uneasy feeling overall. This didn't bother me as I understood the intent was to use dark comedy as a way to explore such topics.
The Man in Search of His Murderer is incredible and, its amazing seeing the start of geniuses like Robert Siodmak, Curt Siodmak and of course Billy Wilder.    Whilst there is a lot of glaring issues I think that this is a strange, interesting and darkly funny film and its well worth checking out.
Picture: I wasn't able to find any info on the restoration, but I will say that the film is looks as good as its probably going to get. Murderer has its share of scratches, artifacts etc but you can also tell that a lot of cleaning up and restoring went into making this a fairly clear looking movie. Its not perfect but it may be the best given the material. After all older movies sadly weren't kept in the best conditions.
Sound: Murderer has a 2.0 track. Like the visuals the sound has some issues by way of background hiss and noise though nothing that is so bad it detracts from the overall film. You also have to forgive a movie that is almost one-hundred years old at this point.
Extras: Film historian Josh Nelson provides a very interesting and well researched commentary. He goes through the history of the production as well as the notables that worked on the film. If you are fairly new to Sidomak's work this is great track to get started.
Posted by The Video Attic at 11:04 AM