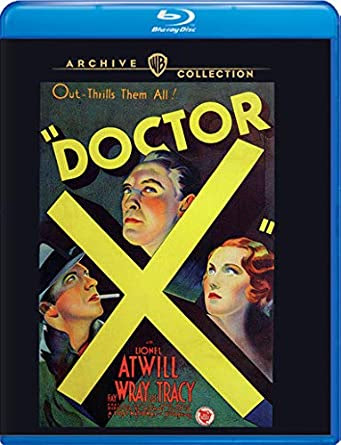 I had the pleasure of interviewing Scott MacQueen who did the restoration on this title. Click HERE to read it.  Link will open in a new browser and those with pop-up blockers may need to make adjustments.

I've been a fan of 1932's Doctor X ever since Warner Bros. released Hollywood Legends of Horror Collection on DVD in 2006. It was through the commentary on the disc that I learned about the fabled black-and-white alternative version (more on that later) and other facts about the film, all dispensed by historian Scott MacQueen. Little did I know back that I would, over a decade later get to talk to Scott about his amazing work on restoring the film. The movie centers around a hot-shot reporter named Lee Taylor (Lee Tracy) who is covering a series of ghastly murders done by a fiend dubbed The Moon Killer. Meanwhile the police seek the help of Doctor Xavier (Lionel Atwill) and learn that the bodies have been feasted on after death. 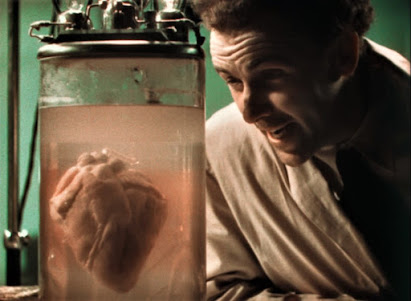 In terms of pre-code shockers, Warner Bros. Doctor X truly pushes boundaries. Taboo subjects like drug-use, sadism and even cannibalism is explored frankly. Of course the movie is incredibly tame when viewed from a modern lens however there are things that I find unnerving, jaded as I am. The movie is far from perfect and I think its a bit overly complex for its own good and, Curtiz asks its audience to suspend a lot of disbelief.  And, while individual mileage may vary, I am not a fan of the cheesy horror that Warner saddles the film with.

Whilst the plot may need some streamlining Doctor X more than makes up for in spooky atmosphere which was every bit as on par with what Universal was doing at the time. This is largely thanks to two-time Oscar winning cinematographer Ray Rennahan (Gone with the Wind, Blood and Sand) who gives this movie a scope and scale that further elevates it to the status of classic.

Director Michael Curtiz who would go onto win an Oscar nine years after Doctor X with Casablanca (1942) and classics like White Christmas (1954). Curtiz never treats the horror genre has B-movie fodder and injects class, style and some incredibly chilling moments just like would do with The Mystery of the Wax Museum (1933) a year later. Fay Wray (King Kong) and Lionel Atwill are brilliant in their respective roles and each one brings

Picture: Restored by UCLA Film & Television Archive's Preservation department, Doctor X is a revelation on HD! We get a brand-new 4k scan and, wow, it looks amazing. All scratches, dirt and artifacts have been scrubbed clean and the flickering color temp. has been stabilized. I feel like I don't need to get into great detail as Scott shares quite a lot about the process in my interview (See link above). This also includes a newly restored black-and-white version which includes alternate takes and scenes.

Sound: Like the transfer Doctor X has a fine job at cleaning up the audio and getting rid of any background hiss or noise.

Extras: Warner Archive has LOADED this with great features. Ported over from the previous DVD release is: Commentary by Scott MacQueen. New features include a new commentary with historian Alan K. Rode. As I mentioned above Scott's commentary is, as all of his tracks in-depth engrossing and made me first aware of the legendary 'black-and-white version'. Rode's is also incredibly well researched and I think he brings some new insights into Doctor X. It really is a treasure to have both tracks from two top-notch historians.

Madness & Mystery: The Horror Films of Michael Curtiz (27mins) A fantastic featurette on Curtiz which includes interviews with Alan Rode's and Scott MacQueen.

Doctor X: Before and After Restoration Reel-Comments by Scott MacQueen

Also included for the first time in home video, the fully restored Black and White version which includes alternate shots/takes.