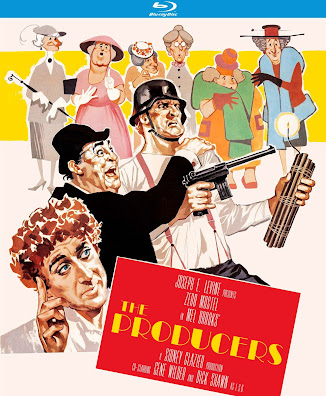 Mel Brooks has cemented himself in as a comedy genius. Someone who could wonderfully and masterfully dance on the line of bad and good taste. 1967's The Producers had a shall we say mixed to harsh critical review upon its release and had 'produced' an actual hit Broadway musical and a terrible film remake. Max Bialystok (Zero Mostel) a down on his luck play producer and his account Leo Bloom (Gene Wilder) scheme to produce a flop and reap the profits. They stumble on the worst play ever titled "Springtime for Hitler".

So, its interesting that even when the movie was released in '67 critics blasted the movie for being tasteless, mean-spirited and lacked the satire that Brooks was aiming for. Personally I think the movie is a mixed bag. The cast is great with the larger-than-life Zero Mostel as the sleazy producer and of course, the legendary Gene Wilder as a ultra-high strung accountant Leo Bloom. Wilder is a national treasure and anything he did oozes charm, pin-point comic timing and hilarious delivery. The supporting cast is also great with Dick Shawn giving a career high as L.S.D and of course Kenneth Mars as the insane playwright. Mars would later team up with Brooks for Young Frankenstein (1974). It also features William Hickey, Lee Meredith and Estelle Winwood.

The movie as you may imagine has aged poorly with its overt sexism, casual homophobia and transphobia. I also question if the satire works entirely well here. It feels like  shock-value without Brooks typical sharp sardonic wit to back it up. I think you can satirize and should make total fun of Hitler, something Chaplin did to great effect. Here it only seems like its half way there and without that polish in the writing Brooks seems to be for the most part punching down in his humor.

The Producers I feel works better in the context of a actual Broadway play and not just a straight movie. To Brooks credit the movie features a fantastic cast and does have its moments of comic genius. However I think it struggles when it comes to Brooks normal quick-wit and edgy satire.  Good enough for a few chuckles but certainly not Mel Brooks best work.

Picture: The Producers includes a new shot-by-shot color grading. The movie certainly has a big bold uptick in color. Brightly color costumes such as Estelle Winwood's blue dress truly pops. In the same scene Max's wine red smoking jacket not only pops but you can see the velvet texture. The overall film has a warm look to it. The movie is also scrubbed clean of any artifacts, scratches etc. The film does suffer from some blurring and grain levels are a bit on the heavy side.

Sound: The Producers has a 2.0 track. The dialogue, music and sound design comes through nicely and, in my opinion is really solid.