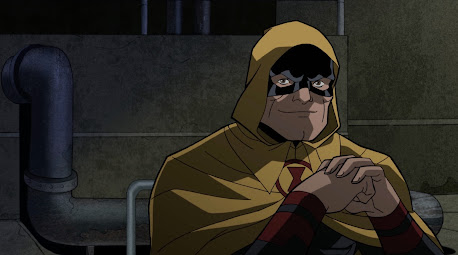 A highly-regarded voice actor for the better part of three decades, Mercer is known for his work across anime, videogames and traditional animation. While his fans have gravitated to his recent success as the Dungeon Master in the phenomenon that is Critical Role, Mercer’s resume includes such performances as Tygra in Thundercats, Leon S. Kennedy in the Resident Evil franchise, Superman in DC Super Friends (2015) and Jotaro Kujo in JoJo’s Bizarre Adventure. After supporting roles in Justice League: War and Batman: Bad Blood, Mercer elevates to a DC Universe Movies featured voice as Hourman in Justice Society: World War II.

Produced by Warner Bros. Animation and DC, the feature-length animated Justice Society: World War II will be distributed by Warner Bros. Home Entertainment on Digital starting April 27, 2021, and on 4K Ultra HD Blu-ray Combo Pack and Blu-ray on May 11, 2021.

The three interview bites (tied together) feature Mercer chatting about Hourman’s unique powers, his place within the dynamic of the Justice Society of America and within the plot itself, and his personal appreciation for Hourman’s specific characteristics and background.

Clip will open in a new browser