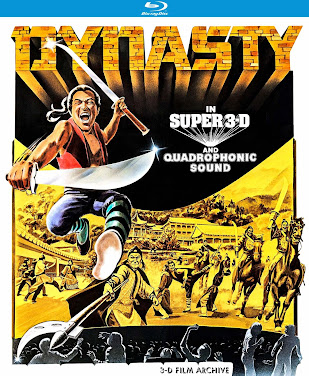 Strap on some 3-D glasses as Kino along with the 3-D Film Archive presents another film in their 3-D series. Wrongly accused of treason, the Prince of the Emperor must fight for his life in this '70s kung-fu flick. The 3-D trend had fizzled out after the '50s but re-surfaced in the late '70s and more notable in the '80s with the threat of home video. 3-D seems to be more tailor made for the horror and sci-fi genre yet, after seeing 1977's Dynasty, I wish more kung-fu movies had been made in this format. If you are looking for a compelling or interesting plot, you wont find it with Dynasty. The script is a pretty typical though I will give it credit for having some interesting tricks up its sleeves. That's not to suggest this is a bad movie, indeed, its entertaining as hell.
Though the plot is a bit on the copy-and-paste side, I was transfixed by the high-flying action. Stunt coordinator Ying-Chieh-Han who worked on several Bruce Lee films including The Big Boss (1971) and Fist of Fury (1972). Ying stages some truly dazzling fights that really hook you from the start. The 3-D shots are equally impressive and clearly Mei-Chun Chang carefully thought out where he was going to use the format. Whilst on the subject of the action scenes, the movie skirts this weird line of being super tame blood and gore wise but also graphic at the same time. For example, we get a ton of decapitation's but the blood is kept to a minimum. I have to wonder if I good deal of gore was cut out as the movie has some sloppy editing in some of the more violent scenes.
Dynasty has a pretty by-the-numbers plot but I think that the amazing action and stunt work more than makes up for it. It's also a movie that really makes the most out of the 3-D format.
I also reviewed another 3-D movie from Kino Wings of the Hawk (Review HERE)
Picture: After over forty-years Dynasty has finally been fully restored by the 3-D by the 3-D Film Archive. The movie looks great overall with a nice level of detail and clarity. The film does have some artifacts, scratches but this is kept to a minimum. And, honestly it's more fun to watch a old kung-fu movie with some flaws, enchanting that Grindhouse feel.
Sound: Dynasty has a nice 5.1 track and, fans of the movie are in for a treat as Kino has restored the movies 4-channel quadrophonic sound. This makes for a damn impressive track that highlights the movies well done sound design.
Extras: Kino has provided a fun array of 2-D/3-D features which includes: The House of Terror Restored 1953 3-D Comic Book, Two Stereo Slide Presentation from 10-Time Emmy Award Winning Writer Eric Drysdale: Sold on Stereo, Commerical in 3-D in the 1950s and "Inside a Mid-century Department Store", Go Away I like You Too Much 3-D Music Vise form The Simple Carnival by Jeff Boller, Super-Touch Lens System Featurette by 3-D expert Mike Ballow produced by Joe Tiberio
Posted by The Video Attic at 10:20 AM