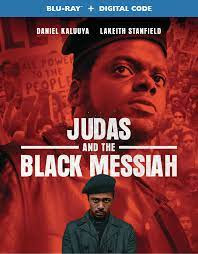 Nominated for Six-Oscars and winner of two including Best Actor for Daniel Kaluuya Judas and the Black Messiah (2021) comes to home video. Bill O'Neal (LaKeith Stanfield) becomes a FBI informant at the Illinois chapter of the Black Panther party in the late '60s. Neal is conflicted by his role of being a mole, especially after he gets to know chairmen Fred Hampton (Daniel Kaluuya). Shaka King's second feature is as compelling as it is timely and the events depicted in the film and its a somber reflection on how far we have to go in this country to bring racial equality. This biopic is handled with a great amount of skill and nuance that honestly few others can boost. Characters feel real and their environment feel equally brutally honest and heartbreaking. King's opus is an intense and a wholly unforgettable experience. If you don't come out of this movie by the end credits with tears in your eyes, well, there might be something wrong.

The other thing is the movie doesn't seem to take a moral stance on Bill O'Neal, but rather takes a step back and lets the audience drew their own conclusions. This is where I think that had this movie been in lesser-hands would have drawn very unwavering morals. And, people are complex and are neither the hero nor the villain.  From a technical standpoint the movie is top-notch with excellent cinematography, music and of course acting.

We often debate whether the Academy get it right but there is no doubt that Daniel Kaluuya deserves his Oscar win. Kaluuya completely disappears in the role and delivers a raw powerhouse performance. LaKeith Stanfield has the task of playing the titular "Judas" and does so with a skill and layered take on the material. Not to be outdone by the boys, Deborah Johnson is excellent. Johnson deliver some of the most heartbreaking moments and even thinking about it gives me chills. Honestly, there isn't a pour acting performance to be found here.

Judas and the Black Messiah rises to instant classic status and ranks among the best recent films. Moreover it reflects a brutally honest truth to moviegoers that is sadly still needed in todays climate.

Picture: Judas and the Black Messiah comes to us on 1080p and looks great. The transfer has a great deal of detail in locales, costumes and sets. Darker lit scenes really showcase the range of high quality in terms of deep blacks and contrast.

Sound: Judas has a DTS 5.1 track. The film has a lot of dynamitic sound design and music and this sound transfer matches that perfectly.