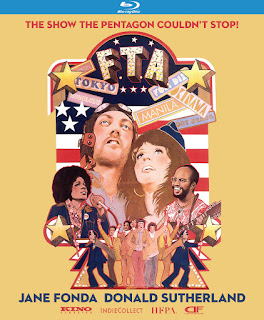 The FTA or Free The Army tour was a anti-Vietnam tour aimed at active servicemen. This was a direct opposite to Bob Hope's jingoistic shows. Headlined by Jane Fonda and Donald Sutherland this film version of the tour was needless to say incredibly controversial. In fact, its believed that the movie was shut down in its theatrical run after just two weeks. According to Fonda's introduction, the government even attempted to destroy all copies of the film. While the nature of the disappearance of the film is up for debate, the movie was pulled and out of circulation for a long time. Thankfully, the film has been restored and widely available.

FTA provides a honest, raw and unflinching snap-shot right at the heart of the anti-Vietnam war movement. As Fonda points out in her newly filmed introduction this movie captures the anti-war movement within the military, something that the news and films never showcased. Not only do we get a front row seat in what is described as 'political vaudeville' in the form of satirical skits but the film also highlights the people of these war-thorn places and focuses on them as well. This aspect of the documentary I found to be deeply fascinating and powerful. The candid talks between Fonda and the local people whose lives were thorn apart by this conflict is both interesting and sobering. After all, their points-of-view is one that was often left out, and to get it actually during the conflict is important from a historical viewpoint. FTA also features musical acts which, again, I found very soulful, insightful and engaging.

FTA was a movie that scared a lot of political powers at the time but remains a unflinching look at the anti-war movement within the armed forces. Its a piece of history that demands to be watched.

Picture: Fully restored by IndieCollect in 4k this documentary looks great. There is a noticeable uptick in color and the footage which is over fifty-years old is has been given a cleaned up considerably. The film still has some artifacts, but, honestly that adds to the films atmosphere.

Sound: FTA comes with a DTS 2.0 track. I have to say this packs a big punch and the music, dialogue comes through nicely with no background hiss or unwanted noise that I could detect.

Extras: FTA has a brand-new Jane Fonda. A interview with Fonda from 2005. This also includes Sir! No Sir! A 2005 documentary by David Zeiger (83mins), and a trailer. It also includes a nice booklet with essays by historians David Cortright and Mark Shiel.