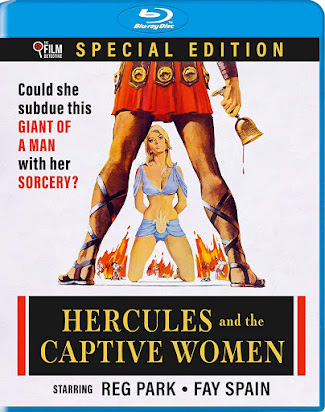 Disclaimer: The Film Detectives has provided me with a copy of this film free of charge for the purposes of review. All opinions contained within are my own honest reflections.

After Steve Reeves hung up the mantle of Hercules, actor and body builder Reg Park took over as the Greek God. Most notably Park appeared in the fan favorite 1961's Hercules in the Haunted World, directed by Mario Bava no less. The same year that Haunted World was released also saw Hercules and the Captive Women. Hercules (Reg Park) discovers the vile queen of Atlantis is plotting to take over the world. It's up to the Greek strong man to foil her plans.

So, I confess that I've never been a big fan of the whole 'swords-and-sandals' genre. By default these are largely beautifully shot but rather boring affairs. However, I've tried to push myself to explore more sub-genres that I've been neglectful of thus, I decided to give Hercules a fair shot. The movie is pretty standard in the genre though with battles, love affairs and monsters for ol' Herc to fight. But, I have to say the movie was entertaining, even if it was for the, so-bad-its-enjoyable quality. Indeed, the camp value makes this movie a minor-hidden treasure. A giant lizard man, and a assortment strange characters not to mention the word Uranus being bantered about makes for hilarity. To the films credit the sets and production value are top-notch and help lend itself to a surreal vibe. Reg Park is really good in the role and adds a level of charm and pathos to the role. Nobodies winning any awards any acting awards but I have to give Park credit for treating the material with dignity but at the same time never totally underplaying it either.

Hercules and the Captive Women didn't really change my mind on these kinds of movies but I will say that I enjoyed it nonetheless.

Picture: The Film Detectives has really provided fans with a nice looking print. What is so striking is the movie has been wiped clean of artifacts, scratches and other damage. The level of detail is for the most part incredible. You can also tell that some work has gone into the color grading. If I had to make a minor complaint it would be there are some overly bright scenes. Thankfully though, this isnt bad enough to be distracting.

Sound: Like the Greek god himself, Hercules packs a big punch sound wise. The 2.0 is crisp, clear and delivers a full sound. Dialogue comes through nicely with no unwanted hiss or background noise.

Extras: Hercules has a host of great extras including:

Hercules and the Conquest of Cinema Documentary (19mins) This Bollyhoo produced featurette talks about the history of the 'swords and scandal's' Hercules movies. A really well done short documentary on these films micro 'epics'. I found this engrossing and I can easily see this getting a Rondo nomination.

Rounding out the features is a commentary by Tim Lucas.

This release also includes a booklet with a fantastic essay by author/historian Courtney Joyner.

Final Thoughts: As always, I rarely do final thoughts on any single release unless I feel its special. The Film Detective has been a label that is incredibly exciting with their recent output. Any company that puts out quality genre films on HD is always exciting and should be supported. Hercules might not be my cup of tea (though this was fairly enjoyable) I still am happy that fans can now see a fully restored version with a ton of great extras. Hopefully the label will be unearthing more treasures in the future.