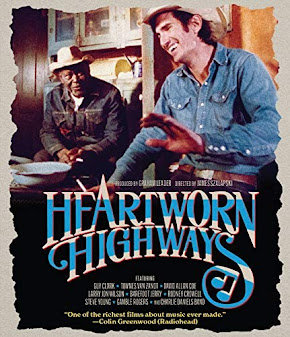 I admit that I may be writing this review with misty-eyes seeing how my late-grandfather played country music and, in his own way had a big local following where I grew up. Now, I confess that country music is not a genre that I find myself ever listening to but, just like movie-musicals I didn't turn my nose up when it came to choosing this country-music documentary to review. Because I think its always interesting to explore a subject, especially when its something I know very little about. The film follows country musicians in their highs and lows in the industry.

Heartworn Highways is a big chunk of unfiltered Americana the good, and the not so-good. We get a rare glimpse into the music scene at a very specific point in time. The movie is a mostly somber, soulful reflection of the heart of the music being expressed by these artists. Footage of rural America in all its raw un-glamor give the movie a punch. Highways is a slow paced but methodical exploration. I think my major complaint with the film is its rather unfocused and there doesn't seem to be a specific figure and or conflict at the center. I think its a missed opportunity to interview older people from generations past to reflect the modern (then the '70s) style and how the two are similar and different.

In my opinion the most interesting part was the part of the documentary where they play at a men's prison. Is  this the greatest music documentary? No. Is this a vital piece of Americana captured and perfectly preserved in moonshine? Hell yes! I wish the film had a tighter focus but, I still found it fascinating none the less.

Picture: From the first few minutes you can really see a noticeable uptick in color and brightness. You can really see, especially after watching the unrestored trailer that the film probably hasn't looked this good since its the print was struck. Darker lit scenes really offer a glimpse into how nice this new transfer looks. Obviously the original material has probably seen better days and we still get some snow and artifacts. Honestly though, its nothing that I feel distracts from the overall presentation. In fact, I would argue you wouldn't want a pristine looking '70s documentary and its rough feel gives it part of its charm.

Sound: Heartworn Highways has a DTS 2.0 track. The 2.0 track actually packs a pretty big punch which is what you want from a music documentary. Dialogue comes through nicely without any hiss or unwanted background noise that I could detect. Overall, a really nice sound presentation.