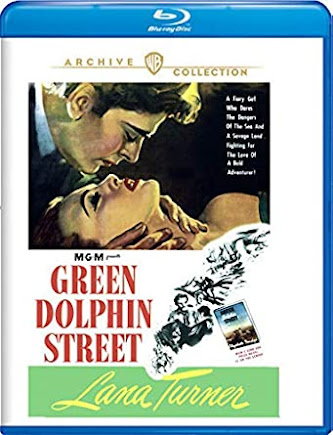 Green Dolphin Street (1947)  is a showy star-studded drama that seems to be scientifically made to be nominated for Best Picture at the Oscars. And, though the film was nominated 4 Academy Awards (and won only one Oscar for special effects of all things) it was shut out of the best picture category. I only mention this because this sweeping epic clocking in at nearly two-and-a-half hours perfectly fits that Oscar bait. For me the movie is a mixed bag but I think it has more going for it than detracting. The story tells of two lovely sisters of wealth, one natured named Marianne (Lana Turner) and the other Marguerite (Donna Reed). A handsome naval officer mistakenly proposes to the wrong sister in a drunken haze and must solider on with his mistake.

I love a good doomed romance movie and Green Dolphin Street certainly fits that bill. This is a big budget sweeping epic that is really easy for a movie lover to get fully engrossed and lost in. The themes of loyalty, devotion and sacrifice are not only timeless  but riff for drama.  Edmund Gwenn, Van Heflin, Donna Reed and Lana Turner all turn in top notch performances. Couple this with a stark, haunting and nearly perfect cinematography by George J. Folsey (for which he was nominated for an Oscar) and a brilliant score by Bronislau Kaper (Munity on the Bounty) and you have a fantastic film.

What holds this movie back and maybe why it was snubbed for Best Picture that year is, while I can appreciate the big scope of the story the movie is a little overly bloated. I think a tighter narrative would have gone a long way.  While mileage may vary Green Dolphin Street is maybe a little more overwrought than it really needs to be. Also, while I dont think the characters are by no means shallow they could have used a bit more fleshing out.

Despite its flaws I think this is a fine film with everybody working on it at the very top of their game.

Picture: Green Dolphin Street's transfer comes courtesy of a brand-new 4k scan and wow, this movie looks stunning. As I said the film has incredibly brilliant cinematography and this new transfer truly does it justice. The film is scrubbed clean of any dirt, scratches and artifacts leaving behind a pristine image. Furthermore, the grain has been smoothed to where you virtually cannot see it unless you are really looking for it. As always WA has handled the black-and-white contrast with a lot of care and the movie has a added depth that I feel safe in saying has never been seen on the US home video market.

Sound: Like the picture transfer the sound fairs incredibly well here. The movies dialogue and sound design comes through nicely with very little to no unwanted background noise.

Extras: The extras include a Lux Radio Theater Audio Broadcast and the Original Theatrical Trailer.