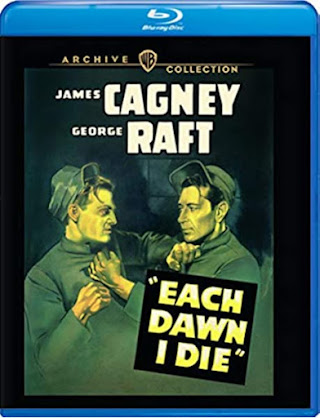 1939' Each Dawn I Die is a men-in-prison/gangster film but also intersects with the 'innocent man wrong accused' genre. News reporter Frank Ross (James Cagney) is framed for manslaughter in order to silence him from spilling a story on corrupt D.A. His newspaper helps in clearing his name but its going to take a fellow inmate 'Hood' Stacy (George Raft) to do the job. A scheme is hatched for Ross to bust out Stacy in order to help clear his name.  Director William Keighley is best known for the colorful The Adventure of Robin Hood (1938) which won 3 Oscars. A year later a very different film from Keighley was released, a stripped down, stark black-and-white prison film.

Dawn was released early into the Hays Code but make no mistakes, this movie is still has a bite over eight-decades later. Keighley's film is a pull-no-punches look at corruption in the prison system whilst  also being a thrilling popcorn film. What I find really interesting is the movie doesn't just solely focus on Ross but also provides a savage indictment on the prison system and how rotten it can be.  I was actually pretty shocked that an American movie at this time would be this cynical about the penal system. No doubt later films and television would showcase a more virtuous presentation of the US justice system. And, as I said the movie also provides some great action-set pieces with a fantastic finale.

Tough guy James Cagney gets a rare good-guy role in Each Dawn and, as always the native New Yorker shines. What made him an icon is Cagney always brought something honest to the table and here he really gets to show off his wide range. The scene in which Cagney's Frank has breakdown at the parole board is perhaps his finest moment in any of his films. It's the kind of raw emotional core that I think is lacking in some of his earlier gangster roles. Gangster actor George Raft does a fine job but next to Cagney its easy to see why Raft never really a big impact outside of crime films. Raft is solid enough but he tends to come off stiff and robotic.

Further helping to elevate this prison film is cinematographer Arthur Edeson. Edeson photographed such classics as Casablanca (1942), All Quiet on the Western Front (1931), The Maltese Falcon (1941) and, the grand daddy of all monster movies Frankenstein (1931). Here Edeson gives the movie a grand-scale and scope with amazing compositions, camera angles etc.

Each Dawn I Die may be over shadowed by films like The Public Enemy (1931) or White Heat (1949) but is a fantastic outing that is harrowing, engaging and features the always amazing James Cagney at the wheel.

Picture: My jaw-dropped by how incredible Each Dawn I Die looks in 1080p! This new 4k scan really is a work of art. Each Dawn  has been scrubbed clean of any dirt, artifacts or scratches and what we are left with is a pristine looking film. Small details really leap out where you can even see textures on costumes etc. Things thankfully don't look over processed and the black-and-white contrast is extremely well balanced. Warner Archive has really been treating fans to beautiful looking transfers and I have to give the studio a ton of credit for celebrating their classic films.

Sound: Like the transfer this '30s era movie has been given a clean, crisp audio presentation. For a 2.0 track this audio offers in my opinion a big bold sound.

Extras: Each Dawn I Die is loaded with some cool archival extras.

First we have a feature length commentary by film historian Haden Guest.

Breakdowns of 1939: Studio Blooper Reel (14mins) A funny look at bloopers in various Warner Bros productions. I really love these, they are so enjoyable to watch. Especially when things get a little shall we say blue.