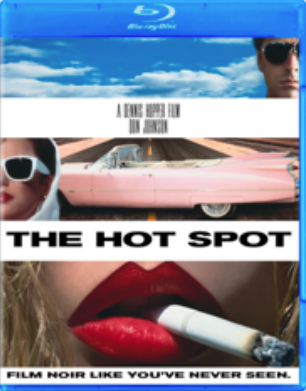 Legendary Hollywood Hell-raiser Dennis Hopper directed seven feature films in addition to his acting career. In fact, Hopper's debut Easy Rider (1969) is considered a classic and a vital piece of counter-culture cinema. Hopper's second to last feature (not including his two short films) is 1990's The Hot Spot. Harry Madox (Don Johnson) a world-weary drifter blows into a small town and sets up as a car salesmen upon he meets Gloria (Jennifer Connelly). One day he gets an idea to rob a bank, setting off a chain of events in this Neo-noir.
The Hot Spot is obviously a smoky, summer sun drenched love letter to classic noir-outings like The Postman Always Rings Twice (1946)  (and remade in 81) and, the granddaddy of them all, Billy Wilders seminal Double Indemnity (1944). Though, the movie for me is a mixed bag. First what I enjoyed about the movie. The cast is excellent with Don Johnson doing a nice balancing act of charming and a self-serving prick. Virginia Madsen seems to be relishing her role as the slightly-over-the-top Southern femme fatale. Your mileage for Madsen's accent may vary but I think she's great in the role and, though she may get close, she never skirts the line into hammy territory. Jennifer Connelly plays the 'good-girl' which is the opposite to the femme fatal and is a tradition in classic Noir fare. Connelly is, as always great in the way she can so easily project a innocent charm but underneath brewing raw sexuality.
The movie has a great deal in the way of mood thanks to Ueli Steiger's cinematography (Austin Powers) and Cary White's excellent production design. Garish Bava-like blues and reds drench scenes giving them a nice hyper-real touch. Furthermore, weird and off-beat characters help give the movie a Lynch feel to it. And, the soundtrack is excellent with hot summer-baked jazz that perfectly elevates the film. The style, moody and effortlessly cool soundtrack bucks up against the films lumbering pace and sometimes aimless plot. Hot Spot suffers from a bloated plot that seems like it would have been perfect had it been streamlined.
The Hot Spot is a movie that is horribly paced but has enough style and strangeness to keep it engaging.
Picture: The Hot Spot is a darkly lit film. Even in sunny scenes the film has a harsh palate to reflect the hot summer. The movie retains that warm color palate and I was thankful that it seems to conform to the directors vision and the visuals arent washed out, overly brightened or over-processed. Sporting a new 2k scan the movies colors pops, as does small details and clarity in sets, locales costumes etc. There really wasn't much to fault with this print.
Sound: Kino has a DTS 5.1 track and I have to say this packs a big punch in its sound presentation. The dialogue, music and sound design comes through nicely.
Extras: Previously released (and now out-of-print) was bare-bones but now, we have some nice new features including: New Interviews with stars Virginia Madsen and Willian Sandler. Both interviews are wildly entertaining and end engaging. This release also includes a commentary by journalist and author Bryan Reeseman.
Posted by The Video Attic at 10:49 AM