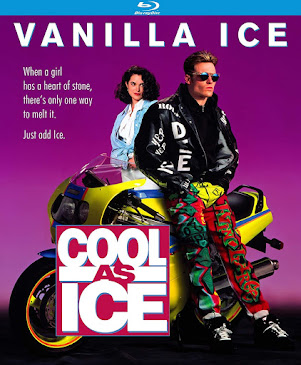 1991s Cool as Ice a big budget vanity project starring 'flavor' of the moment Vanilla Ice. The movie was made on a six-million dollar budget and only grossed just over one-million. Critics were pretty harsh at the time as well. However, the movie has gone onto gain a cult-following over the decades. The plot, and I use that word very loosely centers around Johnny (Vanilla Ice) and his crew getting stuck in a small town. Johnny falls for a local girl named Kathy (Kristen Minter).

When you think of big budget movie projects built around flash-in-the-pan celebrities few come close to infamy of Cool as Ice. The movie is so painfully of its era with a heaping helping of cheese. Everything in this movie feels like a marketing committees made up of out of touch older people throwing in everything they had seen on MTV and put it in a neon-colored blender. The movie is less of a feature film and more one long music video with a very loose narrative thread pulling it together. Not to mention everything smacks of cynically milking cultural touchstones that were lame even back when it first came out. Not to mention the weak storyline and flashy whiplash montages.

Still, the movie is just over-the-top and earnest enough to cross into that so-bad-its-enjoyable threshold. The film is actually well acted with Michael Gross giving a performance that is far better than this movie probably deserves.  And, whatever you think about Vanilla Ice, its hard to deny that he has a lot of charm in front of the camera. As I said this movie has a loyal fan base which is must likely fueled by nostalgia of a seemingly simpler time. Cool as Ice is a stinky slice of fried gold and a shrine to the early '90s.

Picture: This color coated movie certainly pops on 1080p. While not a 2k scan this movie really looks good, probably far better than it deserves. The film retains a lot of clarity in the sets, costumes and locales. I did notice the grain level is heavy at times and there is some minor blurring in places.

Sound: Cool as Ice has a DTS 2.0 track. Dialogue comes through nicely as does the music and sound design.

Extras: Cool as Ice includes a very fun and informative commentary track by historian and author Alexandra Heller-Nicholas and Joshua Nelson. As always Alexandra and Joshua are engaging as hell and its well worth listening to.