Hands Across the Table, Love Before Breakfast, The Princess Comes Across 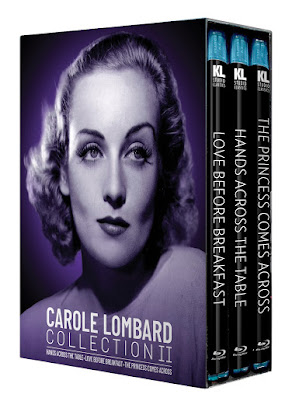 Disclaimer: Kino Studio Classics has provided me with a copy of this film free of charge for the purposes of review. All opinions contained within are my own honest reflections.
For those of you that are not familiar, Carole Lombard was an actress that had a wide range. She could do serious films, but, she was most famous for what has become known as the screwball comedy. The term screwball comedy refers to a sub-genre of romance films that often featured over-the-top, zany situations. These became popular in the Great Depression and throughout WWII. Carole Lombard was the Queen of Screwball comedies and here are three examples.

Probably the most well-known out of the three films featured in this collection, Hands Across the Table tells the story of Regi (Carole Lombard) a down-on-her-luck manicurist whose looking to marry for money not love. She finds a man named Theodore Drew III (Fred MacMurray) who she suspects is her meal ticket. To her horror she finds out that Theodore is actually just as broke as she is. It turns out he too wants to marry rich and the two aid one another in their goals.

As far as screwball comedies, Hands Across the Table isn't what I would call the best but, it is a very solid one. Director Mitchell Leisen crafts a breezy and charming film that, really showcases the two leads. Carole Lombard of course shines here and, as always she tackles the material with humor, heart and pathos. A pre-Double Indemnity Fred MacMurray is great as a charming, likable heel. Like Lombard McMurray finds a nice balance between sincerity and hilarity. My biggest complaint is I feel the overall story could have used a polish in terms of  developing its characters in a more profound and interesting ways. Also, while the film does feature some fun gags I think it would have been a bit more over-the-top.  The movie is a tad on the predictable side but to the films credit its charm and of course the star power helped gloss over some of the cracks.

Whilst it has its issues, Hands Across the Table delivers the goods in terms of romance and comedy during the Golden Age of Hollywood.

Picture: Hands Across the Table comes to HD in a new 2k scan. So, I was watching this movie on a 4K television on a UHD player. I mention this because in my opinion the film is a tad on the bright side at times. It's nothing that is in my opinion distracting or detracts from the overall film. Otherwise you have a very nice crisp image with only a few minor artifacts here and there.

Sound: Hands features a DTS 2.0 track. This is a very solid sound presentation with dialogue that comes through nice and strong with no hiss or unwanted background noise.

Extras: Hands Across the Table features a commentary by Filmmaker Allan Arkush and Filmmaker/Historian Daniel Kremer. The track is lively and engaging and the two bring a lot of great research/information to the table! 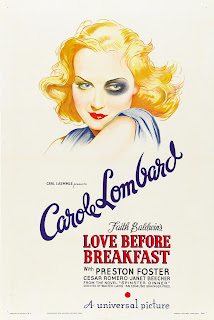 The cover art for Love is...um...shall we say striking. It features Lombard's Kay looking lovely but sporting a black-eye. Yikes. I bring this one-sheet art up because it sort of symbolizes everything you need to know about this film. You have one the surface a very stylish, glamourous side with Lombard breezing through the movie with no concerns about petty things like money. She doesn't work yet she lives in a great apt donning the latest fashions. It's the kind of escapist fantasy life ticket buyers during the Great Depression flocked to.

Then you have some of the more,  lets say, dated elements of the film. For example, the lengths that Scott Miller goes to get Kay is frankly psychopathic when viewed by modern audiences. In fact, the black-eye that is featured prominently in the poster art happens when Miller gets into a brawl and accidentally hits her. These sociopathic lengths that men go for the 'prize' of a woman is nothing new in the comedies of the '30s-'60s and whilst it never is a good behavior there is something about Foster that somehow rubbed me the wrong way more than other characters in this genre. The reason, and, indeed what I feel is the major failing of the film is, Walter Lang tries to coat this film with the sophisticated charms of a Preston Sturges offering but lacks the talent to pull it off. Miller's Foster comes off like an entitled controlling prick and Kay feels more like a possession to dominate and own. Some cringe-worthy Asian stereotypes abound as well.

What saves this movie is of course Lombard who is just sailing through her scenes with such a brilliant range. And, while her co-stars Preston Foster and Cesar Romero are excellent as well, its Lombard who, in my opinion strains herself carries this movie. Lang also cooks up some great gags but again, its nothing you haven't probably seen before in better productions. Overall, a middle of the road comedy made better by Lombard giving the material polish.

Picture: Love Before Breakfast is presented in its original 1:37:1 aspect ratio. The film has a nice balance in the black-and-white photography and showcases Ted Tetzlaff (Notorious) fantastic work. The image retains a lot of detail without being overly bright. There are some moments where the film has some artifacts and scratches Nothing that detracts from the film. Overall, a very nice presentation.

Sound: Love Before Breakfast has a DTS 2.0 track. Overall this is a great sound presentation that celebrates Franz Waxman's score. Dialogue and sound design comes through nicely with no background hiss or distortion that I could hear. A front centric and well handled track.

Extras: Love Before Breakfast has a commentary by Author/Film historian Alexandra Heller-Nicholas and Joshua Nelson. Both give a enlightening and well researched deep dive into the film, its actors and themes. Top notch! Also includes theatrical trailer.

Princess Olga (Carole Lombard) and her Lady-in-Waiting Lady Gertrude (Alison Skipworth) aboard the ship heading to Hollywood. However, it turns out that the pair of grifters only putting on an act. Meanwhile, a murders are taking place on board including a shady blackmailer who found out about the "Princesses" scheme. Also, the boat just happens to have some world class detectives aboard.

The Princess Comes Across has a lot of working parts, as its a screw-ball rom-com, a murder mystery and even a kind of soft-Noir. Indeed, the film has a whooping four screenwriters. But, I don't think it ever really comes together. Before I get to that I want to express what I enjoyed about this movie. Like all the movies in this boxset Carole Lombard's talent and charm elevates shall we say lesser material. Right away this movie tickled my funny bone as Carole does a extremely funny Greta Garbo impression. In fact, the way the film lights her at the start of the film (and her covered in furs) she is a splitting image of her. Fred MacMurray stars opposite and the pairing was so successful the two made four films together (two of which are in this boxset).  Like Hands Across the Table MacMurray is effortless in his charm and appeal. The two play well off one another and its easy to see why they made other films together. William Frawley best remembered for playing Fred Mertz in the television series I Love Lucy is a lot of fun hamming it up as MacMurray's sidekick.

As I said Princess has a lot going on in the plot department. I think maybe someone like Ernst Lubitsch or Preston Sturges could have  pulled it altogether in a more satisfying way. Here though it doesn't really work that well. While it has some clever twists the murder mystery feels woefully underdeveloped. And, despite the chemistry between Lombard and MacMurray the romance also feels painfully underwhelmed. This is because the movie can never breath long enough to really sell us on this love-affair.  I think had this just been a movie about a scheming woman falling for MacMurray's King Mantle it would have worked as a purely fun breezy rom-com. As it stands the murder mystery feels like it awkwardly intersects with the screwball comedy.

Maybe I sound like a broken record but, once again Lombard makes this mish-mash movie work. Again, she brings a lot to the material and dazzles on the screen. Though for me it was a bit underwhelming it does have some clever twists and its a breezy enough watch. It also features some excellent moody photography that gives the movie scope. Enjoyable enough but not one I would likely revisit a lot.

Picture:  Princess Comes Across has an overall nice looking transfer. The image has a nice level of clarity, especially for a film from the late '30s. Having said that the film does have some scratches, artifacts and a few moments of uneven brightness. Some scenes are overly grainy. Nothing that I think detracts from the overall film. A very solid presentation.

Extras: Princess Comes Across has a commentary by filmmaker Allan Arkush and Filmmaker/Historian Daniel Kremer (who also does the track for Hands Across the Table). Both tracks are lively, well researched and most importantly are engaging.