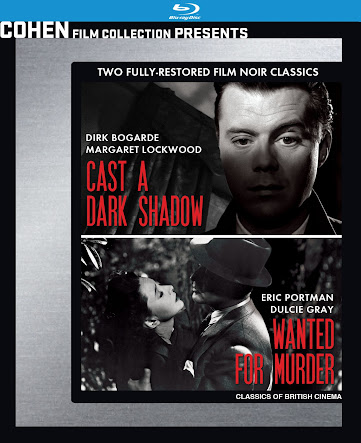 Based on the 1952 play by Janet Green entitled Murder Mistaken, sees playboy Edward happily married to a much older woman named Monica. Edward murders Monica (Mona Washburn) only to find out she left him penniless. The scheming man must find another rich widow. I must say Cast a Dark Shadow was a real treat to discover. The film is just shy of ninety minutes but packs a lot in such a short run-time. This is a  grounded Noir focusing on intimate domestic crime which I always find compelling.

Lewis Gilbert crafts a wonderfully tense little thriller with some sly preserve touches and sprinkled with wicked dark humor. This is also incredible in terms of moody Noir photography and the legendary Jack Asher (best known for his work on Hammer films) does some of his best work here. Dirk Bogarde is fantastic in the lead and has a healthy balance of charm, good looks and menace. Margaret Lockwood best remembered for films like Hitchcock's The Lady Vanishes (1938) and Carol Reed's Night Train to Munich (1940) is outstanding as Freda. Lockwood is every bit as good as Bogarde and the two play off each other nicely. Character actors Kay Walsh (who also worked with Hitchcock ala Stage Fright) and Mona Washburn round out a top-notch cast.

As a fine film as this was I feel like it was a tad predictable, especially for devotees of mysteries. Still, the movie is an engaging and well crafted thriller that is perfect for a rainy day.

Picture: Both films come restored in a brand-new 2k scan and, wow! Jack Asher's photography really is stunning in this new print. Any dirt, artifacts and scratches have been scrubbed and what we are left with is a pristine looking picture. The black-and-white photography is well balanced and you can really see all the details in costumes, production designs etc.

Sound: Cast a Dark Shadow has a 2.0 track. Dialogue comes through nicely with no unwanted hiss or background noise. I will say that I found myself cranking the volume up a bit more here as the sound seems to be on the more timid side.

Based on the stage play of the same name, Wanted for Murder tells the story of a henpecked mothers boy named Victor (Eric Portman) who happens to be a killer. Victor is haunted by being the grandson of an infamous hangman. I have to say that out of the two films, Cast a Dark Shadow is the better of the two. The screenplay is shockingly timid especially having both Rodney Ackland (Michael Powell's 49th Parallel) and Emeric Pressburger of The Red Shoes (1948) fame wrote the screenplay. The films narrative is strong but it lacks the kind of tension and dark humor flourishes that makes the Dark Shadow work so well. The thing that was probably the most interesting was the characterization of Victor, going slowly mad thanks to his blood-stained ancestor.

Frankly the other characters are as dull as dishwater and the shoed in romance only further bogs the movie down. If I were to sum up this movie with one word it would be lackluster. Huntington, Pressburger and Ackland feel like they are only going through the motions instead of crafting a worthwhile thriller. There are roots of good ideas that are never explored and the movie is chocked full of clichés.

Picture: Being the older movie out of the pair, Wanted for Murder doesn't look quite as good as Cast a Dark Shadow. There is certainly a higher contrast in the black-and-white photography but the print is plagued with scratches, artifacts and some dirt. This is also a 2k scan and I have to imagine that the original film elements were maybe in worse shape. It's not so bad that its distracting though.

Sound: Like the transfer the sound for Wanted for Murder is a decent 2.0 track though it has some background hiss and, like Cast a Dark Shadow I found myself cranking the volume but more than usual.