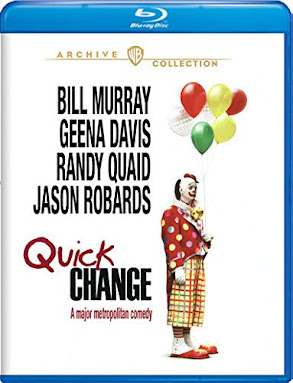 1990's Quick Change marks the only film funny man Bill Murray ever directed. It's a early '90s oddity that, thanks to Warner Archive is getting re-released for a new audience. Murray has as recently as 2010 mentioned the film in high regards. Three hapless thieves rob a bank in New York but they find escaping the city harder than the robber itself. The best way to describe this movie is Dog Day Afternoon (1975) meets After Hours (1985) but with a decidedly lighter tone.

Quick Change was a box office dud but received mostly positive reviews from critics at the time. Weirdly, it never became a cult-classic like What About Bob? (1991) another Murray vehicle released around the same time. Quick Change relishes in its wonderfully odd sense of humor which I think is the most engaging part of this movie. For the most part the jokes fly fast with delivery from its stellar cast. And, speaking of, this movie truly has some great comedic actors.

Bill Murray is of course great and his signature dry wit and pin-point comic timing is worth the price of admission alone. Randy Quaid who turned out to be a character in real life meshes extremely well with Murray and thankfully brings his own style and energy to the film. Geena Davis adds talent and dazzling charm and acts as a perfect counterbalance to Murray and Quaid energy. Out of the trio it never feels like one actor is trying to one up one another yet, they feel like a cohesive unit. This movie has one of the most amazing supporting cast as well with the likes of Phil Hartman, Stanley Tucci, Victor Argo, Barton Heyman and Tony Shalhoub.

I think this movie never really took off in a cult classic sense because it lacks a beating heart and charm that other beloved Murray movies from the '80s and '90s had. The overall movie is well directed but feels rough around the edges in the story department. Howard Franklin's screenplay feels like a solid first draft but lacks the polish needed to bring it to the finish line. Its not that it lacks compelling characters or even arch's but its just missing that special ingredient that makes me memorable.

For a first film Murray and Franklin do a really good job here. They maintain a conversive tone and fun characters but the muddled screenplay tends to drag it down. Still, the cast is amazing with Murray in top form and Quaid and Davis blending and bouncing off him whilst also adding their own magic to the project.  A mixed bag but, I can certainly say I had a good time watching it despite its shortcomings.

Picture: As always Warner Archive delivers a well done picture transfer. This movie, which is over thirty years old retains a nice pop in color and showcases its locales to the upmost. Of course, artifacts, and scratches have been scrubbed clean leaving a pristine looking print. Grain levels are smoothed out nicely as well and the end result is a picture with depth and substance.