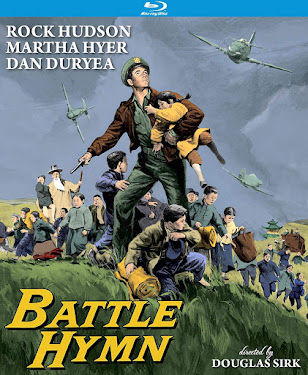 Based on the real life of Col Dean Hess (Rock Hudson) a WWII a bomber pilot who is haunted by the fact that during a bombing raid he killed a lot of people including thirty-seven children. Now a preacher, Hess returns to the Korean war and must face his past. Tough-guy Robert Mitchum had lobbied hard for the role of Col. Dean Hess but, it seems the real life Hess did not want Mitchum as he had a criminal record (on a trumped up drug charge). Ironically, Hess hand picked Hudson who, as we later found out was deep in the closet. Later he came out when the actor sadly was diagnosed with HIV.

Released just two years into Vietnam war, Battle Hymn like a lot of movies from this period it tries to not glorify battle yet it also wants to have its cake and eat it too  by showcases the US war-force as a necessary tool for peace and freedom. This movie in a lot of ways reminds me of Sergeant York released in 1940. The movie also tries to condemn aspects of war while at the same time beating the drum of red-blooded Americans doing what is right. I find these movies inherently hypocritical in this regard. But, putting that aside the movie is well made on a technical level.

Douglas Sirk who made a name for his melodrama's does a fine job with the tricky balancing act of showcasing both the action of war and also the high-drama. And, for as jaded as these war movies have me, I will give Sirk credit for giving Hymn some raw, powerful moments. The Oscar winning cinematographer Russell Metty (Spartacus, Bringing Up Baby) really gives this movie a dazzling look and huge scope. Actor Rock Hudson, best known for his rom-coms really gets to flex his acting ability whilst also using his natural ease and charm.  Hymn in my opinion is a stand out performance in his career. Noir bad-guy regular Don Duryea gets to also stretch himself as a wise-cracking good guy. And, Don DeFore who often played good guys gets to be a bit of a heel (but ultimately a good guy). DeFore like Hudson gives a top-notch performance.

As much as these movies tend to be a bit on the jingoistic side, Battle Hymn is a movie I just couldn't outright dislike. What saves this movie from being just patriotic propaganda is thanks to some well realized characters and a good emotional center. It features fantastic direction from Sirk, actors at the top of their game and stunning photography by Russell Metty.

Picture: Battle Hymn is presented in its original 2:35:1 aspect ratio. Overall, this movie looks great in 1080p. The image has a nice uptick in color without looking overly processed. Also, for the most part the movie is free of any scratches or artifacts. I only noticed a little bit at the start of the film but the bulk is a crisp clean visual presentation. If I had to lobby a minor complaint the movie has some blur and a few spots were it seems overly bright. Very minor and honestly it doesn't detract from the solid restoration work.

Sound: Battle Hymn has a 2.0 soundtrack. The front heavy sound is well done and, in my opinion packs a big punch for a limited audio track.