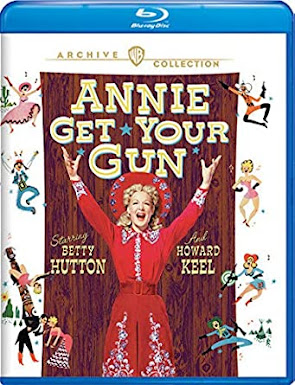 Based on the 1946 stage musical, Annie Get Your Gun (1950) is a big budget re-telling (loosely) of the life of Annie Oakley. The film was made on a over three-million dollar budget and went onto be the highest grossing film of that year for MGM and was nominated for three Oscars and won one (for best cinematography for Charles Rosher). Sadly, due to a lawsuit between Irvin Berlin and MGM over the music rights the film never had a legit home video release until 2000. The film tells of the poor Annie Oakey who rises to fame as a sharp shooter. She joins the traveling Buffalo Bills Wild West Show with her love interest and revival Frank Butler.

As I expressed in my other musical reviews I am fairly new to film-musicals, which has, for the most part, been a genre I have neglected. With Warner Archive re-releasing a lot of musicals in the last few years I decided I would give them a earnest chance. Annie Get Your Gun is an impressive and, for the most part wildly entertaining musical. Sidney Sheldon pens larger-than-life characters that are engaging and easy to fall in love with. The musical numbers based on the musical book of Dorothy and Herbert Fields are great, many of which are iconic even outside of the Annie Get Your Gun. They are not all winners but for the most part they are fantastic. More importantly the narrative moves at a fast pace and it never feels like filler material.

Betty Hutton is fantastic as Annie Oakley and its a tragedy that she was not even nominated for her performance. Hutton brings dazzle, brightness and a childlike innocents to Oakley and she is effortless in the role. Howard Keel is also great and the pair play off each other wonderfully. Louis Calhern is the rare gem in a supporting role as Buffalo Bill Cody. Calhern brings energy, warmth and pathos to the role. Keenan Wynn is, as always a stellar actor. The musical features Native Americans and the stereotypical portrayal is pretty cringe-worthy. All I can say is its misguided but I don't think it was meant in a mean-spirited way. Certainly, when you consider this was seventy-years old (this year) you can tell times have changed.

Overall, this is a fast paced, high-spirited and toe-tapping musical that has a top-notch cast, brilliant photography, and impressive choreography and screenplay. Its a movie that just comes together like lightening in a bottle.

Picture: Two time Oscar winner cinematographer Charles Rosher (The Yearlings) paints Annie Get Your Gun is a big bold cavalcade of bright colors and, this brand-new 4k scan is stunning! The picture is pristine, having been scrubbed of any scratches, dirt and artifacts. As I said this film is a big lavish and colorful outing and this new transfer truly pops. The film retains a lot of detail in costumes, sets and locales. If you are a fan of Annie Get Your Gun and have only seen it on VHS or DVD this new HD version is well worth the upgrade.

Sound: Like the transfer, the sound offers a big punch. The songs, dialogue and sound design is fantastic on a DTS 2.0 track. There is no unwanted hiss and background noise .Overall, just a fantastic sound presentation that matches the picture transfer.

Extras: This release has ported over all the extras on the 2000 DVD and doesn't look like there is any new features included in this release. The extras include: Introduction by Susan Lucci, Outtake Musical Numbers "Doin' What Comes Natur'illy' and "I'm an Indian Too" Sung by Judy Garland and "Colonel Buffalo Bill" and "Lets Go West Again" Sung by Betty Hutton. Audio Outtakes in Stereo "Colonel Buffalo Bill" and "Lets Go West Again" Betty Hutton Vocals, "There's No Business Like Show Business (Judy Garland, Frank Morgan, Howard Keel and Keenan Wynn Vocal and Errors) Theatrical Trailer.