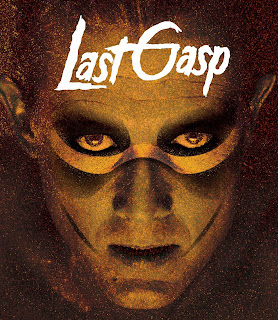 Disclaimer: Vinegar Syndrome  has provided me with a copy of this film free of charge for the purposes of review. All opinions contained within are my own honest reflections.

Robert Patrick had only been working for not even half a decade when he landed a breakout role as the T-1000 in the seminal action classic Terminator 2: Judgement Day (1991).  A real estate agent named Leslie Chase (Robert Patrick) will stop at anything to make his huge land deal happen, even if it means arranging a massacre of a Native Mexican tribe. Now, the spirit of the vengeful chief has possessed Leslies body in order to get his revenge. Meanwhile a private eye is hired to find one of the victims is on the trail of Leslie.

Last Gasp starts off promising enough with a rather fast pace and striking images, such as the death of the first victim. However, things only got worse from there. Sadly, Last Gasp has a silted, confused and at times cringe-worthy plot that is rather dull somehow. It doesn't help the poor pacing when bad soft-rock sex scenes further grinding the film to a halt. Director Scott McGinnis sets this serious tone right away with zero in the way of self-awareness and this would be fine however the movie is just far too goofy to take as seriously as the filmmakers are. Patrick's running around in tribal paint and a loincloth is both cringe-worthy and really amusing.

The acting is mostly wooden though I will say that leads Robert Patrick and Joanna Pacula do the best with what they had to work with. Patrick I will say is probably the best thing about this movie and is always great as a bad guy. Nan Martin who horror fans will best remember from A Nightmare on Elm Street 3 (1987) has a small but memorable role.

Last Gasp isn't the worst movie I've ever seen and, I think that it having the stinky allure of '90s cheese helped me engage even on a so-bad-its-enjoyable level.  But, its probably a movie I wouldn't re-visit any time soon.

Picture: You can breath a sigh of relief because Last Gasp looks frankly looks way better than it probably deserves to. All jokes aside this looks fantastic in 4k with an overall uptick in color and clarity. This was from what I could see free of any scratches or artifacts. Even the grain has been smoothed out without looking overly processed. There was some ever so slight blurring in one scene but, very minor and does not detract from the presentation.

Sound: Like the visuals Last Gasp has a very solid 2.0 track. Dialogue comes through nicely, as does the music and sound design.

Extras: Last Gasp has a few extras including Outtakes and an original trailer.