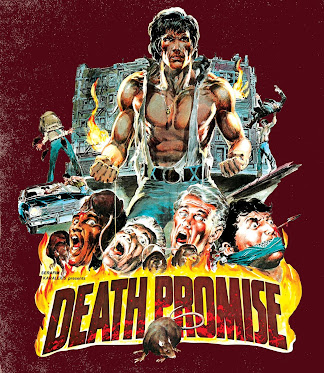 Disclaimer: Vinegar Syndrome  has provided me with a copy of this film free of charge for the purposes of review. All opinions contained within are my own honest reflections.

Released at the height of the Grindhouse kung-fu explosion, 1977's Death Promise marks the one and only film directed by Robert Warmflash. The tenants of a New York buildings are being pushed out by their awful slumlord. Charlie (Charles Bonet) must take his revenge after his father is killed after he fought back against the corruption.

Death Promise was made during what I consider the golden age of not only exploitation but high-flying ass kicking kung-fu. This movie like a lot of Grindhouse films spoke about social and economical unrest and injustice. What works in the films favor is the relatable and timely plot and the character motivations are uncomplicated. It's a simple revenge film that most likely spoke to a lot of disenfranchised people. The biggest issue is this movie is   surprisingly dull in places. The movie doesn't really get going until almost an hour into its ninety minute runtime. What we get is filler material a overly long training montage and scenes that are repetitive and don't move the story forward.

However, once things do get going the action never lets up. There are even some pretty stand-out moments like the wonderfully effective death by rats in a sack. Though the movie is light on plot I will say that Warmflash gives the audience plenty of great action-set pieces, cheesy dialogue and a nice retro soundtrack. I will also give the movie a lot of credit for trying for some kind of emotional arch. Though the movie isn't gory there is a nice amount of blood.

Picture: Death Promise sports a new 2k scan from the original 35mm negatives. You cannot help but be struck by the vivid colors from this new transfer. You can also tell that a lot of clean up has gone into scrubbing most of the artifacts and scratches. The end result is a stellar visual presentation that has a lot of depth of image and clarity.  Its even more impressive when you consider not only the age of the film but the low-budget it was made on.

Sound: Like the transfer, the audio is out-of-sight with a 2.0 track. Dialogue comes through nicely as does the sound design. Its a really strong audio presentation on a small track.