The Redhead from Wyoming, Pillars of the Sky, Gun for a Coward 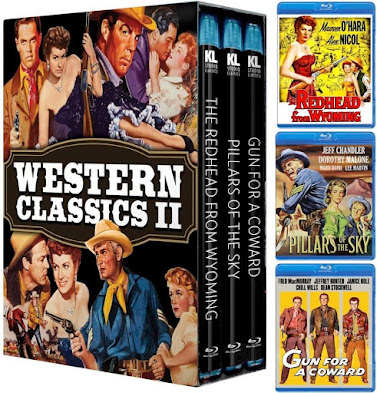 Sheriff Stan Blaine (Alex Nicol) and a fiery redhead named Kate (Maureen O'Hara) find themselves in the middle of a dangerous range war between a scheming cattle baron and new residents. I have to start by saying that I knew virtually nothing but the times central premise revolving around the business of cattle and the in's and out's of branding laws, range wars etc. To the films credit they do a pretty good job from the outset to explain this in the opening. I think the novelty of the premise kept me engaged for the most part but, the narrative always fell back on troupes and clichés. This is pretty much par for the course when you have B-programmers that didn't exactly have the most top-notch writers penning these screenplays.

The movie is a fairly standard action western with a romance subplot or rather shoehorned in. I will say to Redhead's credit the pacing is well maintained and, though predictable the movie is never dull. Maureen O'Hara is for me a big part of what kept this movie interesting and the actress brings a lot to what could easily been a very one-note character. Another thing this movie has going for it is the excellent cinematography by Winton C. Hoch a three time Oscar winner. Hoch gives the movie a huge scope and feel on what I assume was a modest budget. Furthermore, the movie has a nice production design and though it may have been a lesser picture it has a big budget look and feel. The Redhead from Wyoming is pretty standard fare but enjoyable enough with a great cast, some outstanding photography and some enjoyable action-set pieces.

Picture: The Redhead from Wyoming is a color film and this restoration does a fine job at providing a crisp clean and clear visual presentation. The films colors really pop and grain levels are well maintained throughout. There is some slightly blurring and the clarity is probably not as sharp as it could be in places but overall its a great looking film.

Sound: Redhead from Wyoming has a nice DTS 2.0 track. Dialogue comes through nice with no background noise or hiss present.

By far the most acclaimed director in this set is George Marshall. With hits like How the West Was Won (1962) and The Blue Dahlia (1946) Marshall could work in any genre but he is well regarded for his westerns. In 1868 Oregon a war breaks out between Native Americans and the Army over a broken treaty. The head strong Stg. Emmett Bell (Jeff Chandler) is trying to lead whilst butting heads with Col. Stedlow (Willis Bouchey).

On the surface Pillars of the Sky is a very by-the-numbers Army vs Native Americans story.  Add in a haphazard love triangle because these movies always seem mandated to have a romantic angle. Even though the set-up is pretty basic I will say that Marshall really knew how to put together a lean-action packed film. The pacing is for the most part good but, as I mentioned the film tries to have this awkward love-sub plot that frankly adds nothing to the narrative and only slows things down.

Being a film dealing with tribes and Native people there are a lot of Yikes moments. Obviously, this movie does not depict Native Americans in the best light and, films that depict Native Americans (especially in the early days of Hollywood) is always cringe-worthy even at the best of times. The film also has this really uncomfortable message to adhere to religious beliefs or be considered subpar.

It's the credit to George Marshall's skill that he could take a B-picture and it a, for the most part enjoyable outing. This movie also features excellent photography by Harold Lipstein and an early performance by Lee Marvin (just six years into his film career).

Picture: Pillar of the Sky is a very good looking film. The color pops and the clarity is overall good. I will say that this print isn't pristine with some scratches and artifacts (though very minor) and some of the color grading does sway here and there. Grain levels are while maintained but does skew on the heavy side at times. Though its not perfect its still a nice visual presentation and showcases the lush outdoors and costumes and production design.

Sound: Pillars of the Sky has a nice DTS 2.0 track. Dialogue, music and sound design comes through nicely.

Extras: Pillars includes a feature length commentary by Toby Ronan. It also features some trailers for this movies and others.

Probably my favorite of this boxset, Gun for a Coward (1957) tells the story of three brothers youngest Hade (Dean Stockwell), middle son Bless (Jeffery Hunter) and the oldest Will (Fred MacMurray). Bless is branded a coward after his father dies of a snake bit and he fails to save him. When their mother dies the boys set off to run the ranch but trouble is brewing. Will Bless be able to finally stand up for himself and his family? Abner Biberman may not be a household name as a director but as an actor he's been in such classics as His Girl Friday (1940), Winchester '73 (1950) etc.

At just under ninety minutes the film is a, for the most part fast paced film that is full of decently crafted film. Whilst the movie is on the predictable side what is so interesting is how this movie examines and almost de-constructs the idea of masculinity. This is made all the more provoctative in the guise of a western, a genre that is of course known for being super-masculine. The movie does a good job at juggling these complex themes and seeing them through in a fairly satisfying way. Still, the movie suffers from some repetitiveness and standard western troupes. A clunky love-triangle is thrown and in my opinion doesn't really add anything but only serves to slow the main thrust of narrative.

The cast is fantastic with Fred MacMurray serving as the glue that holds a lot of this movie together. MacMurray is charming, suave yet believable in a rough-western setting. This film showcases an early role for Dean Stockwell and Jeffery Hunter. Hunter seems to be groomed for superstardom but sadly, his career fizzled in the '60s and he died at 41. The legendary Chill Wills has a memorable role as Loving. A flawed but complex and interesting western that put a lens on what it means to be a man.

Picture: Similar to Pillar of the Sky, Gun for a Coward has a solid look on HD. The color photography has a fairly sharp look with a lot do clarity. Artifacts and some scratches abound and there is some flex in color tempt and blur. Overall though, I think that whilst its not perfect its a very serviceable transfer.

Sound: Gun for a Coward has a nice DTS 2.0 Dialogue comes through nicely as does sound design.

Extras: Gun for a Coward features a commentary by historian Lee Gambin.